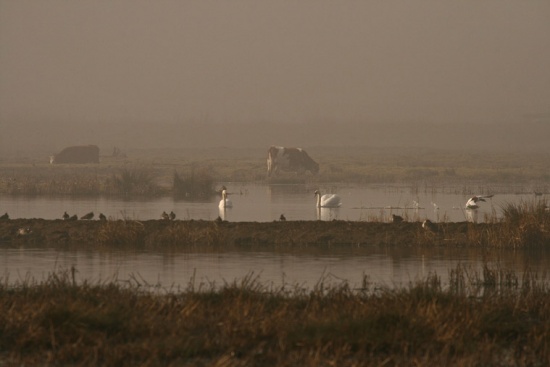 One of the best reserves within easy reach of London.

Bearded Tits and Water Pipits are among the most significant species at the site, and can be very obliging at times. Bearded Tits bred at the site in 2011 and successfully reared one young. Water Rail, Hobby, Stonechat, Cetti's Warbler, Grasshopper Warbler and Shelduck breed as well, and Peregrine Falcon and Marsh Harrier breed locally.

The site attracts less rarities then it once did, though there hasn't yet been close to a blank year yet.

Common and Grey Seals, Harbour Porpoise and Dolphins can be seen in the right conditions. The site has breeding Red Fox, Stoat and Weasel; as well as a fair population of Harvest Mouse, Yellow-necked Mouse, Bank Vole, Water Vole, Short-tailed Vole and various Shrews.

Deadly Nightshade, Bee and Pyramidal Orchids, and Flowering Rush are amongst the many flowering plant species found. Horse Mushrooms are abundant around Purfleet tip.

Rainham was bought by the RSPB in 2000 from the military. There are many paintings, sculptures and preserved structures around the reserve, showing off the site's heritage. There is also a 3000 year old petrified tree stump.

It is always worth a walk along the sea wall. If you walk anti-clockwise you will reach gates to the seawall around three quarters of the way around. Large numbers of the waders and wildfowl are likely to be on the river, especially if the scrapes are frozen. Water pipits may be seen along the shore, especially when the tide is high, but are often best looked for at the "stone barges".

The majority of waterfowl can now be found at the new scrape overlooked from the shooting butts hide. If walking anti-clockwise, you will come to an unmarked viewing area shortly after the viewpoint over the lake. This is a little unfortunate for birders as it means the birds are now a little further away, though many more waders have been attracted by this new scrape.

The Ken Barrett Hide is always worth checking for Golden Plover, though these are often now on the new scrape.

Bearded tits are best encountered at the South-Western reedbed. There are two open areas on either side, both of which regularly attract bearded tit. The best way to see them is to record and play their call from one of these areas.

Search for photos of Rainham Marshes in the gallery

Search for videos of Rainham Marshes on BirdForum TV