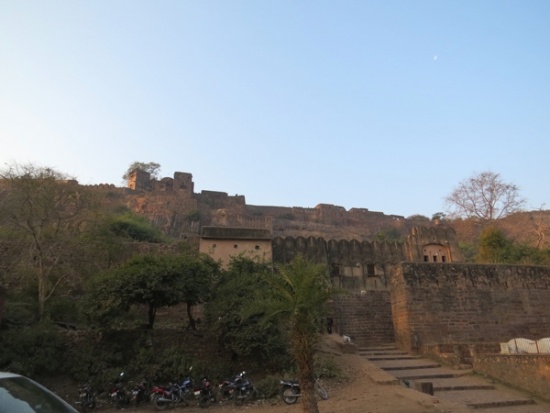 Ranthambore National Park is situated in southeastern Rajasthan and covers an area of 392 km².
The park is famous for its tigers and probably one of the best places in India to see them. The vast deciduous forest also holds a variety of birds and other mammals. 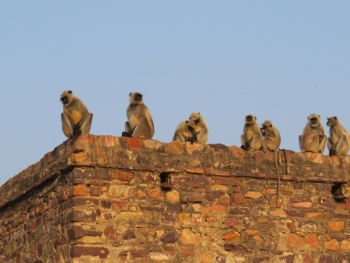 Photo by Wintibird
Northern Plains Langurs at the fort

The park itself is an excellent place to see Painted Spurfowl. A visit to Soorwal dam outside of the park gives you a good chance to find the rare and endangered Indian Skimmer. Indian Vulture is still found in the park but, like in other places in India, is now very rare. 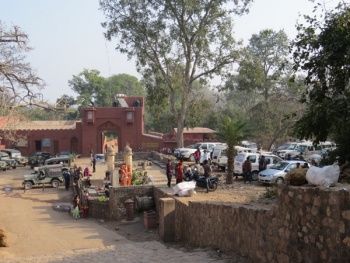 Photo by Wintibird
Parking spot below the fort

Ranthambore is a great place for mammals. The star of the park is certainly the Tiger. Sambar and Spotted Deer (Cheetal) are common, Nilgai (Blue Bull) are often seen just outside the park and Indian Gazelle is also likely to be encountered. Other mammals in the park are Rhesus Macaque, Northern Plains Langur, Common Leopard, Jungle Cat, Common Palm Civet, Ruddy Mongoose, Golden Jackal, Wild Dog, Sloth Bear, Five-striped Palm Squirrel and Wild Boar. Mugger Crocodile are found around the shores of the lakes in the park.

Sawai Madhopur Game Sanctuary was established in 1955 and was declared as a Project Tiger reserve in 1973. Later the protected area was enlarged and declared a national park in 1980.
It's very popular among Indian and foreign tourists and a well visited national park. As a consequence the park can be very busy, especially around Christmas, New Year and other Indian holidays.

Ranthambore fort
The fortress and the road to the fort are the only openly accessible areas in the park. You are allowed to stop the car or walk on the road, however you are not allowed to leave the road. The road can be busy, so be careful. A good place to look out for Painted Spurfowl is the gorge around halfway to the fort. From the parking spot you can walk up to the fort and walk around on top of the hill in the fort area. Check for the Spurfowl around the fort as well, especially looking down from the stairs. Check for vultures, too. You will need half a day to cover the area. Try to be early as the fort can get very busy with local tourists.

Soorwal dam
This artifical lake is located about 8 kms north of Sawai Madhopur. It can be reached by car. Take the road north out of Sawai Madhopur (towards Lalsot and Dauda). Turn left just before the small airfield to Adarsh Nagar, following the road to Pachipalya. After the village turn right to the small village of Mathurapura and continue for another 800 ms until you reach the dam. Check for waders, gulls, Indian Skimmer, flamingos, herons and egrets and other birds of open areas.

Safaris
You can choose between larger and smaller cars for safari. Smaller cars can reach all zones, larger cars only some of them. When entering the park with the safari car you get randomly (at least that's what they say) selected for a zone. Zone 2 and 3 are the best for tigers, however if you get another zone you are not allowed to cross into a zone where a tiger has been seen. To increase your chances to see a tiger you have to book several safaris in a row. You will also see birds, however they are usually not the first priority. Look out for vultures and other raptors.

The town of Sawai Madhopur with its railway station is 11 kms away from the park entrance. There are various hotels and lodges in all price categories between the railway station and the park entrance. The accomodations can arrange tiger safaris, however during holidays you should arrange accomodation and safaris in advance. You can reach the fort with a private car or a taxi, the other parts of the park are not accessible.