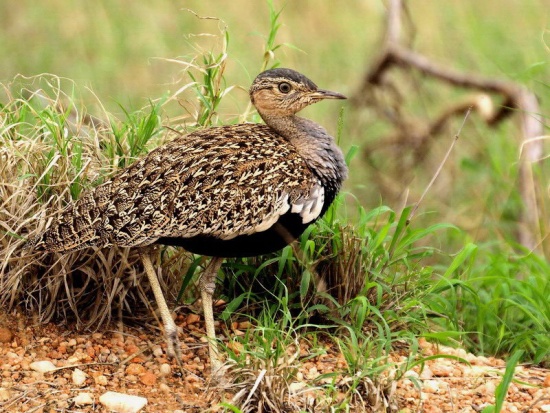 Adult male: The crown is grey and the crest (which is concealed unless displaying) is rufous. Upper parts are brown; feathers have black centres and white chevron marks. The foreneck is grey. The underparts are black except for white patches on each side of the upper breast. Cream supercilium. The eyes are pale, the bill dark horn and the legs and feet are off-white to grey-green. 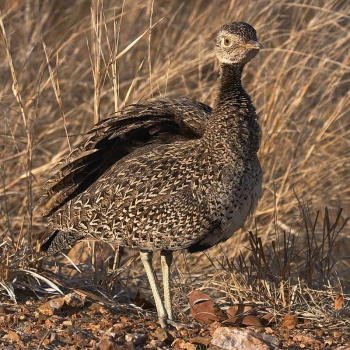 Adult female: Similar to the male, but the crown is brown with white flecks, and the neck and upper breast are buff with black flecks, grading to a broad white breast band.

Solitary; inconspicuous unless calling or displaying.

Forages for invertebrates such as beetles, grasshoppers, ants and termites; also berries, seeds, fruits and gum while walking.

Polygynous. The mating display of the male is spectacular; he flies up vertically to a height of 10-30 m, throws his feet up, tumbling over and drops to the ground like a stone, opening his wings at the last minute.

Females are probably not territorial, but nest alone. The nest is a shallow scrape in the ground, often near a shrub or sapling. One to two eggs are laid October to April, peaking earlier in the east. Only the females incubate and care for the young.

When displaying, the male has an extended vocalisation which starts with a long, accelerating series of clicks: tic, tic, tic, finishing with a long series of piping whistles: pi pi pi pipity pipity. It can also make a squeaky, whistling sound that is very ventriloquial.

Search for photos of Red-crested Bustard in the gallery

Search for photos of Red-crested Bustard in the gallery