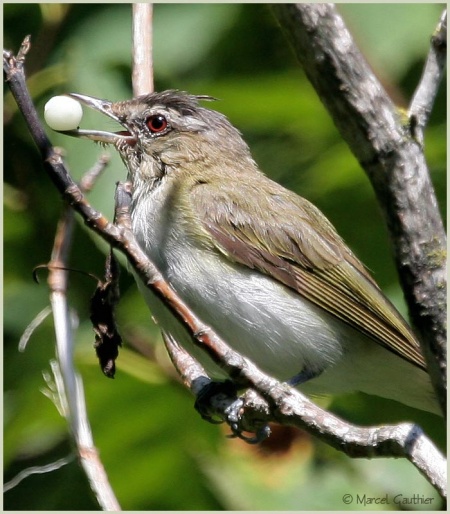 13·8–15·6 cm (5½-6 in)
Sparrow-sized. Olive green above, whitish below, with a narrow white eyebrow bordered above with black. Gray crown. No wing bars.

Warbling Vireo similar, but lacks gray crown and black border over bold white eyebrow. Similar to a number of species, including Black-whiskered Vireo, Cuban Vireo and others.

Species known as a vagrant in western Europe.

Chivi Vireo was formerly included in this species. 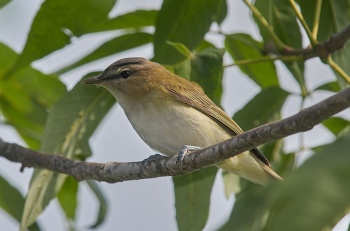 • Forests of a deciduous and combination of coniferous and deciduous type, preferably where there is good undergrowth cover and Alder and Aspen growth in the northern portion.

• Gravitates to the interior of the forest as opposed to the outer perimeters.

• Canopy openings in the forest are a good spot for them.

• Found near streams in pine heavy forests in the southeastern United States where a concentration of hardwood growth is present.

• Known to breed up to 2,000 meters/6,500 feet elevation in the Rocky Mountains of the United States.

• Will go to urban areas with large trees

• Utilizes a broader classification of habitat than when breeding, still favoring deciduous trees over conifers.

• Will still use urban settings, groves, and scattered trees in open areas.

• Pine and oak areas with appreciable amounts of undergrowth in the autumn in northern Gulf coast.

• Forest perimeters and and recovering forested areas in Guatemala.

• Various cover up to 3,000 meter/9800 feet elevation to include forests, agricultural areas, groves, trees in gardens and substantial undergrowth

Forages slowly high in trees.
Their summer diet is mostly insectivorous, especially caterpillars, with the addition of other insects, such as moths and butterflies, beetles, ants, grasshoppers, etc. During the autumn and winter they switch to a variety of seeds and berries.

The cup nest is suspended below a branch. It is built by the female with help from the male. The clutch consists of 1-5 white eggs with sepia speckles. Incubation takes 11-15 days.

A series of hurried phrases. Not burry like most vireos.