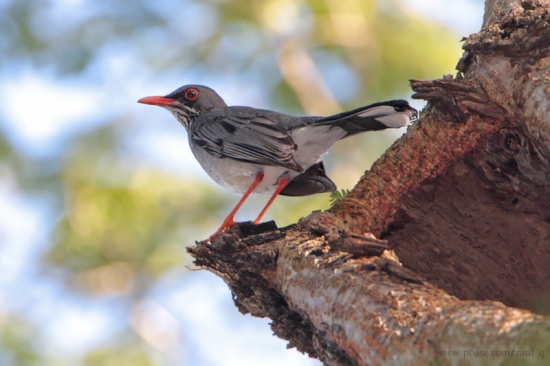 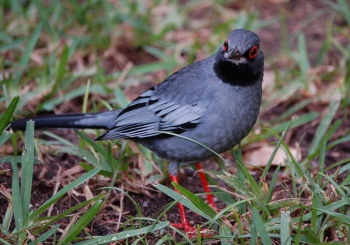 Generally has slate gray upperparts, red legs and bill, red eye-ring, and white corners of the tail; the tail is long and rounded or graduated. Underside is variable with some subspecies showing reddish-brown abdomen, others showing white, and others again showing gray. Throat is also variable, black, gray or white with black stripes; there seems to always be some white somewhere around the throat or chin. At least in Dominica, white outer tail feathers are visible in flight (not mentioned in field guides).

This bird has a disjunct distribution with one population in Dominica (Lesser Antilles) and another in the Greater Antilles including Northern Bahamas, Cuba, Cayman Brac in Cayman Islands, Hispaniola, and Puerto Rico. 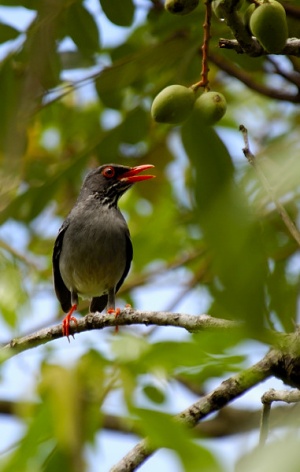 This species has previously been considered to belong to a different genus and therefore had the scientific name Mimocichla plumbea; Johnston (1969) argued for this treatment. DNA results support this species belonging within the Turdus thrushes, unless these are to be split into several genera.

In total, there are six subspecies recognised by Clements[1], with some distinct differences in plumage. It would seem prudent to do more research on the taxonomic status of these taxons.

A seventh taxon is most often treated as a separate species, the Grand Cayman Thrush, which became extinct between 1916 and the 1960ties.

In e.g., Puerto Rico seems to prefer the higher elevation, wetter forests, while on e.g., Dominica it likes the lower elevation dryer scrub-forest.

As described by Vaurie (1957), at least the subspecies rubripes in Cuba shows some behavior patterns that would be more typical of thrashers than most Turdus thrushes, including holding the tail kinked upwards when alert, and looking similar to a large catbird when moving around on the ground or through undergrowth.

The male, when trying to impress the female, will flash his wings in a short display similar to what is seen in Northern Mockingbird. ====Vocalisation Song is described as similar to La Selle Thrush; however, Red-legged Thrush should regularly include a sharp pit or wit sound missing in song of La Selle Thrush.

Search for photos of Red-legged Thrush in the gallery