Length: 26-31¾" (66–81 cm). Wingspan: 46" (117cm), Weight: 1lb (450gm)
Adult: A large polymorphic wading bird with long, flexible neck and long legs characteristic of the family. Most birds are dark morph, and easy to identify with their reddish head and neck, grayish body, conspicuously two-toned pink bill with dark tip and whitish eye. Immatures are greyish-brown, paler below with reddish tinge to head and neck faint or absent. Bill is mostly black in non-breeding birds.

The Pacific coast subspecies has paler head and neck than eastern birds. In the Gulf of Mexico there is a small population (no more than 7%) of white morph birds, more common further south in the Caribbean. It can be difficult to distinguish from other egrets: note the completely dark legs, dark lores and long dark heavy two-toned bill.

Little Blue Heron is similar but is smaller without a pink bill base. It is darker slate-blue and its head and neck are dark maroon in breeding plumage. Immature Little Blue is similar to white morph Reddish Egret but has dusky wing-tips and greenish legs. Snowy Egret is even smaller with yellow feet and lores and slimmer dark bill. Reddish Egret's distinctive foraging behavour, lurching and dashing about with wings spread is diagnostic. North America, Central America, and northern South America as well as in the Caribbean.
In North America breeds on the Gulf Coast of the USA, Mexico and on the Pacific Coast of Mexico; outside breeding season spreads to California (where it may also breed) as well as north along the Atlantic coast. In Central America is found in summer along the coast of Yucatan in Mexico and Honduras and on the Pacific coast down to Costa Rica. More widespread outside of breeding season.
In northern South America is found on the caribbean coast of Colombia and Venezuela.
In the Caribbean, it is expected to be breeding in Bahamas and Cuba, with recent summer records also from Hispaniola and Puerto Rico. Extirpated as breeding bird in Jamaica, but occurs there outside of breeding season. Vagrant in Panama. 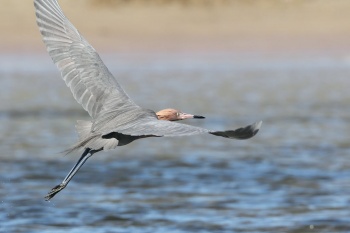 They nest on coastal islands almost year round in Florida, with peaks in November to January and February to May; March to June in Texas; and summer in Baja California. The nest is quite flat and large for the size of the bird. It is composed of dry sticks, interspersed with grass and leaves. They form colonies alongside other herons, spoonbills or cormorants. On arid islands they nest on low shrubs, cactus or on ground but in mangroves they use trees or high bushes. Clutch is typically 3-4 eggs; incubation period is 25-26 days. Chicks of white morph have white down, while those of dark morph have smoky grey down with greyish cinnamon head and neck. The young fledge in about 45 days.

Forages in shallow coastal areas and estuaries for small fish, usually no more than 10 cm/4 inch long. Usually solitary, they move quickly compared to other wading birds. They have a variety of feeding techniques either holding or flicking their wings open when feeding, presumably to either cast shadow and attracting fish or to scare the fish into movement which makes them easier to see.

Usually silent. Most common call is a throaty awwwwh or AWWH-uhh.

Search for photos of Reddish Egret in the gallery

Search for videos of Reddish Egret on BirdForum TV