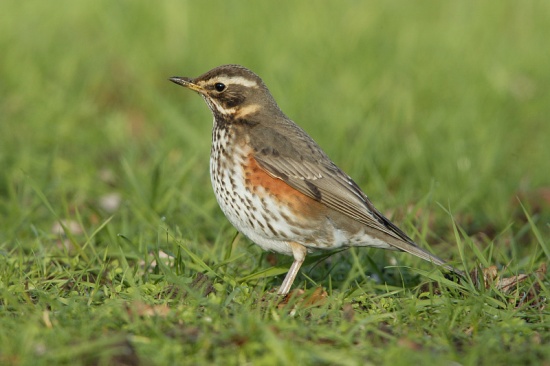 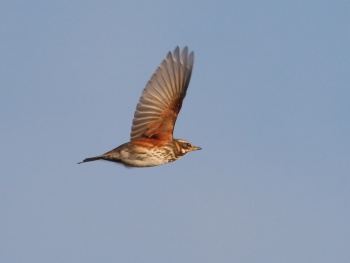 Length 20-24 cm (7¾-9½ in), weight 46-80 g
Adult: Olive-brown upperparts and marked light supercilium. Underparts are paler but with a spotted breast (which are arranged in vertical lines) and chestnut flanks and underwing. Dark brown bill and yellowy-brown legs.
Juvenile: Similar, but also streaked above, white tips to tertials.

Song Thrush, lacks the eyestripe. Fieldfare has a grey head. In poor light, or distant views, could be confused with Dusky Thrush or Eye-browed Thrush.

Relationships unclear. One genetic study rather surprisingly suggested it is not related to other European and Asian thrushes, instead being closer to a group of American thrushes including American Robin T. migratorius[1], though this has not been supported by subsequent research, which instead found a closer relationship to Eurasian Blackbird T. merula and other Eurasian thrushes[2]. 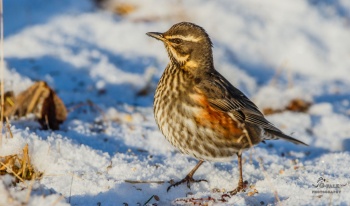 There are two subspecies[3]: 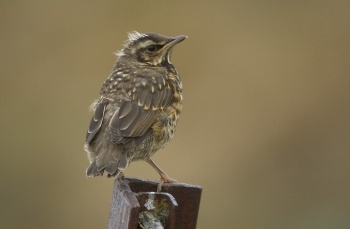 Breeds in mixed conifer and birch forests. In the wintering grounds, it feeds on berries in trees, and on invertebrates (earthworms, etc.) in moist grassland. It typically forms loose flocks mixed with Fieldfares and Common Starlings, and to a lesser extent with Song and Mistle Thrushes. Vagrants in North America usually associate with flocks of American Robins.

Fast and rather like a Common Starling, but with more rounded wings, and flying in looser flocks. Mainly migrates at night.

Its diet includes berries and worms.

Nests in tree stumps, in trees or bushes, or on the ground. Often assocated with Fieldfare colonies.

Search for photos of Redwing in the gallery

Search for videos of Redwing on BirdForum TV