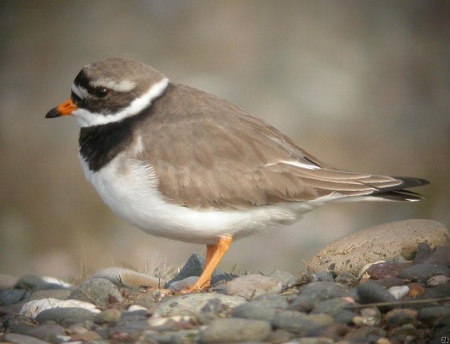 Photo © by peteee23
Point of Ayre, Isle of Man 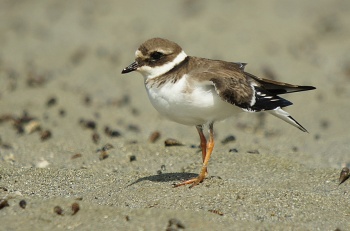 Length 18–20 cm (7–7¾ in), wingspan 47–57, weight 42–78 g
A medium-small plover. Has a distinctive bold black and white pattern on the head, black breast band, short orange bill with a black tip, and orange legs. The sandy brown upperparts blend well with a variety of shingle and sand colours, so that a sitting bird is often unnoticed.

In winter, the legs usually becomes a little duller, the bill becomes mostly or all black, and the black in head and neck markings becomes browner and less distinct.

Immatures are similar but with many feathers having white edgings giving a scaly impression.

Semipalmated Plover is closest, differing in having vestigial webs between the toes, a shorter white supercilium, and a different call note. Little Ringed Plover, the more common similar species in Europe, differs in being smaller, with a narrower breast band, no white wingbar, a yellow eye ring, dull pinkish legs, and slightly paler brown upperparts. 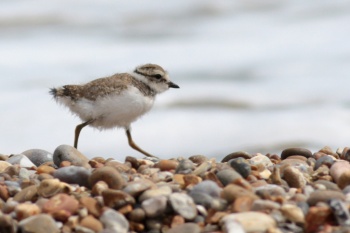 Mainly Old World, marginal in North America: breeding from northeast Canada and Greenland to Europe (the northern half, including Britain) and northern Asia, wintering mainly in western and southern Europe, Africa, and southwestern Asia; small numbers also wintering in southeast Asia and Australia. Populations exhibit leapfrog migration, with the northernmost breeding birds (e.g. arctic Scandinavia) migrating the furthest south as far as South Africa, while birds breeding at the southern edge of the breeding range (e.g. Britain) only migrate short distances if at all. Vagrant to southern Canada, USA, the Caribbean, and New Zealand.

Closely related to Semipalmated Plover; the two have been considered conspecific by some in the past. 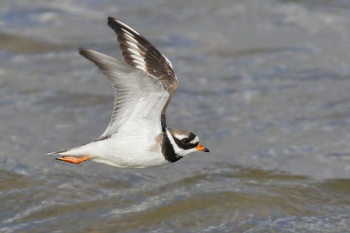 Two1 or three2 subspecies are accepted; differences are clinal making subspecific allocation difficult in some cases:

Mostly seen at the coast, but also found inland, wherever there is water with sandy or gravelly margins, e.g. gravel pits, reservoirs, and in the tundra.

Ringed Plover can be almost impossible to see with the naked eye when on shingle beaches - one of its favourite habitats. Its movement, flight or plaintive call almost always reveal its presence, however.

The short bill is used to forage along the low water mark and amongst pebbles and drift seaweed. Sand hoppers and insects are favoured prey.

The eggs are laid in a depression with no nest material at all, often just above the strandline, and may be inundated by exceptionally high tides. One parent sits on the nest while the other forages nearby. Disturbed birds will wait until they feel safe, then one will run up the shore to the nest.

Once hatched, the chicks are soon on the move, exploring their surroundings (see images of 2 ringed chicks). When danger threatens, a call from a parent causes them to freeze and sit tight until the parent calls the 'all clear'. Chicks are brooded beneath parents when conditions are cold or wet, but are left to find their own food. Like other wader chicks, their legs and feet appear oversized compared with the body and it takes several weeks before their proportions resemble those of the adult.

Adults will defend the young against predators 3-4 times their size, e.g. Herring Gulls; they will also perform a broken wing display to lead predators away from nests or chicks.

Search for photos of Common Ringed Plover in the gallery

Search for videos of Common Ringed Plover on BirdForum TV