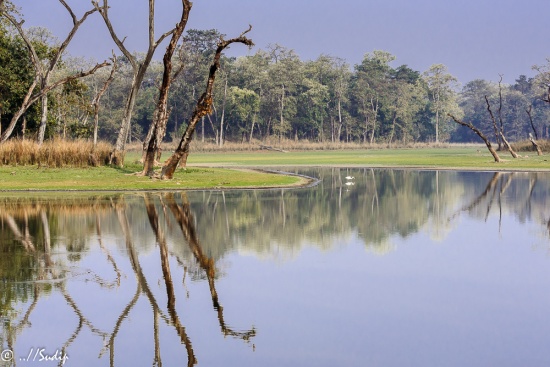 Covering more than 950km2 and with a bird list of 544 species, Chitwan is the most popular birding site in Nepal and one of the best in Asia. Habitats include large areas of lowland Sal (Shorea robusta) forest, pinewoods on higher slopes and ridges, riverine forest and extensive tall grasslands as well as small lakes and three rivers. 100-150 species are possible in a day visit. 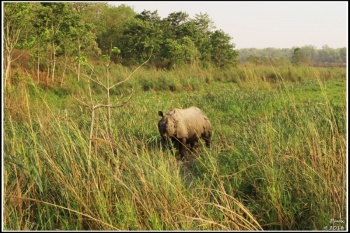 There is much of interest for birders throughout the year in the various habitats. Among the numerous forest birds are Blue Peafowl and Kalij Pheasant, Brown Fish-Owl and Brown Hawk-Owl, Malabar Pied Hornbill and Great Hornbill and various pigeons, woodpeckers and passeines.

Mammals are also well represented with Indian Rhinoceros, Gaur and Tiger among the most notable species. Others include Dhole, Sloth Bear, Jungle Cat and various civets and mongooses, Rhesus Macaque and Grey Langur, Sambar, Chital and Hog Deer and Ganges Dolphin.

Chitwan can be reached by road from Kathmandu via Narayanghat or by air via Meghauli and there is an entrance fee. For those who cannot afford to stay within the park at the famous Tiger Tops, there is basic accommodation in local villages such as Sauraha and Meghauli. Elephant rides and boating trips are available and it is possible to bird most of the park on foot.

Search for photos of Royal Chitwan National Park in the gallery

I should say that I'm not primarily a birdwatcher but as I did live in Chitwan for a year (1990) I can at least offer some general info.

Don't think Chitwan is just Tiger Tops that's for mega rich tourists and won't gaurantee you any more sightings than a backpacker could expect.

There are plenty of tourist lodges in the village of Sauraha, they are very cheap and basic (thatched mud huts with a bed and a mossie net) but that's all you need. The park's only physical boundaries are the rivers (no fences) so the wildlife come and go as they please crossing in and out of the park at will.

Sauraha is on the riverbank, you cross the river (in dry season you can wade across) and you are in the park. In order to enter the park you need a permit which the staff at any tourist lodge can obtain for you. You can go into the park on organised elephant or jeep trips or on foot with a local guide (usually someone from the lodge) or you can go on a canoe trip. When I lived there it was possible to enter without a guide as long as you had a permit, I often went around on foot unaccompanied. Only rules are you enter after sunrise and leave before dark otherwise you are liable to be shot as a poacher.

As I said I'm no ornithologist but would say you are gauranteed to see the following on any given day as they were pretty much everywhere: Night Heron, Hoopeo, mynas, green pigeon, vulture, drongos, rose ringed parakeets, cattle egret, rollers, peacocks.

There's a good chance (50/50) you'll also see: Kingfishers pied and regular, Bea eaters, Osprey (one used to fish in the same spot 10 feet from me every evening), Orioles, serpent eagle, egyptian vulture, and various other things that I never knew the names of (sorry)

As for other animals: the Indian one horned rhino is virtually gauranteed, they're all over the place. Marsh mugger crocodile are always about, gharials more elusive. I never saw a tiger the whole time I was there but heard them many times and was never far from them. You may see leopard if you are lucky and Sloth bears are not uncommon. Gaur and buffalo are pretty widespread. Termite mounds, strangler figs, boar, Sambar Deer and Chital are all pretty easy to see on foot in the forest.

There are plenty of wooded areas on the non park side of the river that you can visit for free and there's a nice afternoon walk down to the elephant camp where you could bump into just about anything on a good day (saw a leopard in the middle of the path during the monsoon).

I'm sure I've missed out loads but it was a long time ago, I wouldn't hesitate to recomend it to anyone.