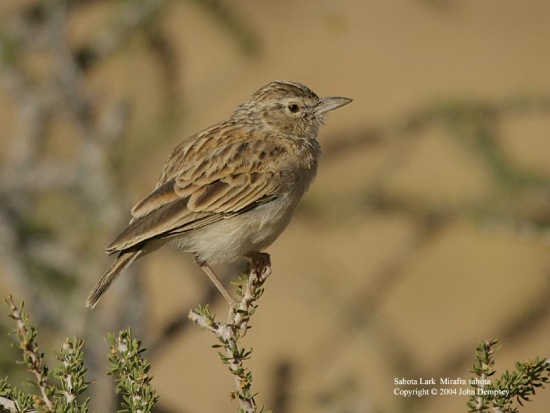 Sabota Lark is more distinctly streaked above and on breast than Fawn-coloured Lark, which lacks moustachial and malar stripes. Rufous-naped Lark is larger, has a simpler song, a longer bill, a crest, and a reddish panel on the folded wing. Melodious Lark is smaller, has less distinct streaking on the breast and less distinct eyebrows; it also seldom sings from elevated perches (usually sings in flight). 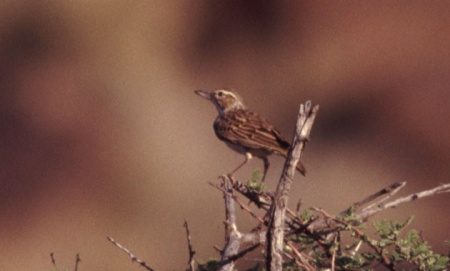 There are nine subspecies varying in plumage tone and bill size:1,2

Formerly placed in genus Mirafra but genetic evidence suggests that this species is closely related to the Karoo Lark complex.

Usually solitary or in pairs. Often sings from an elevated perch, but also in aerial display; the song is complex and variable, including melodious notes, whistles, trills and buzzing sounds; mimics a wide variety of calls of other species.

Monogamous and territorial. The nest is a cup built of dry grass on the ground. Two to four eggs are laid October to May (earlier in the east). Young are fed by both parents.

Search for photos of Sabota Lark in the gallery