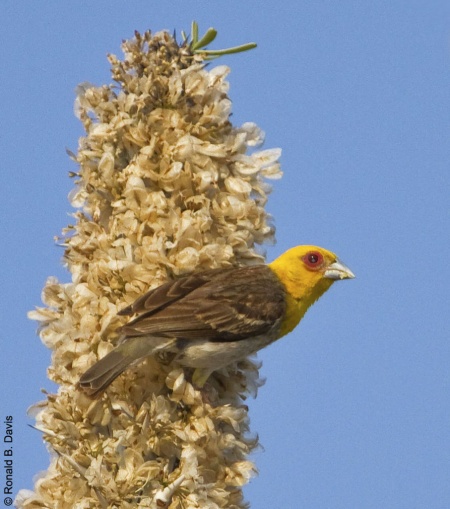 minor is very similar to nominate but slightly smaller.

Endemic to Madagascar.
Common in parts of its range. Locals think that weavers nesting in their village is a sign of good fortune.

Possibly forms a superspecies with Nelicourvi Weaver and has been considered conspecific with it.

Feeds on seeds but takes also insects and spiders, especially in breeding season.

Breeding season may depend on local rainfall. Usually September to October in northern Madagascar and November to April in the western part. Breeding more irregular in the arid south.
A colonial breeder with 10 to 120 nests in a colony, up to 40 in a single tree. Primarly monogamous, some males may be polygynous. The nests are retort-shaped, the entrance extending into a 17 to 40 cm long tunnel. It's made from grass, leaf steams and strips of palm leaf. The nests are placed in a palm or a tree, 2 to 25 m above the ground, sometimes below the nest of a Pied Crow, a Black Kite, a Madagascar Buzzard or a Madagascar Fish Eagle. The nests can also be suspended from a thatched roof of a village house. Lays 2 to 4 eggs.
The nests are sometimes preyed on by Madagascar Harrier Hawk and are also used by Madagascar Munia.

Colonies are left after breeding, suggesting some local movements.

Search for photos of Sakalava Weaver in the gallery