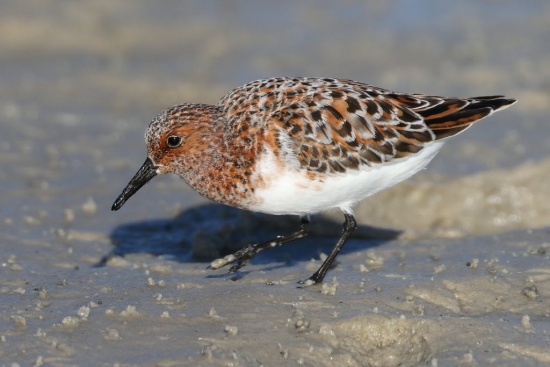 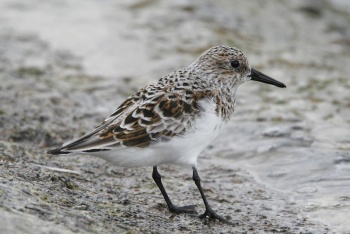 In flight, strong white wingbar more conspicuous than in any other Calidris species.

Summer adults can be confused with summer adult Red-necked Stint and Little Stint; Sanderling differs in being significantly larger, and in close views, by lacking a hind toe. The behaviour, fast running on sandy shores, is also usually distinct, though vagrant Sanderlings in muddy habitats can behave more stint-like.

Breeds in the far-northern Holarctic (concentrations in Canada, Greenland and Siberia); non-breeding range is on coasts worldwide (for example, a bird breeding in Greenland may winter anywhere from northern Europe to South Africa). A migrant (spring and autumn) and winter visitor to Britain. Rarely seen any distance inland. 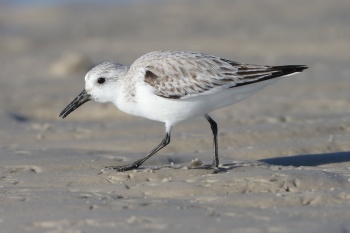 Treated by some authorities as monotypic[1], while other authorities[2][3] recognise two subspecies:

The two subspecies are very similar, distinguished only by small differences in morphometrics[2]

Nesting habitat is rocky tundra, while coasts and especially sandy beaches are used the rest of the year. 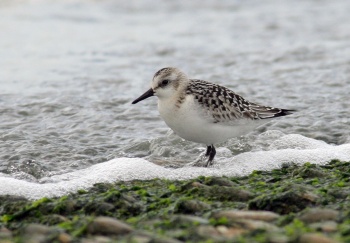 Typically runs very fast on sandy beaches at the edge of the waves, roosts in tight flocks on beaches or rocky outcrops just above the high water mark.

Search for photos of Sanderling in the gallery

Search the Gallery for videos of Sanderling:

Search for photos of Sanderling in the gallery