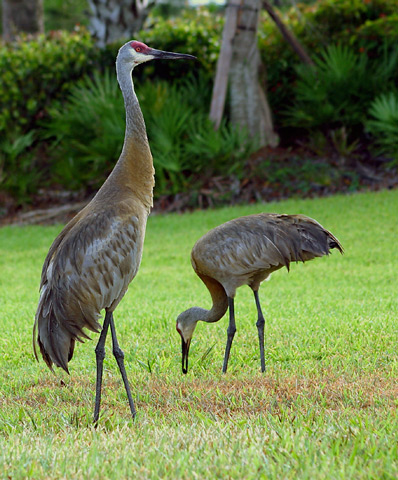 Immature browner, no red on head 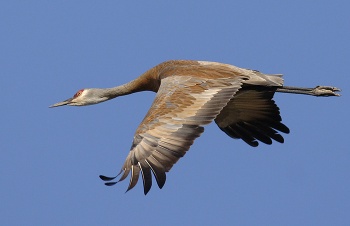 Breeds from Siberia and Alaska east across Arctic Canada and the United States.

Winters to southern US and Cuba.

Also placed in the genus Grus. 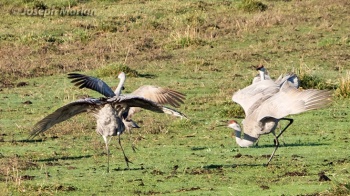 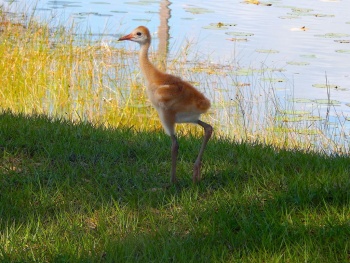 Large freshwater marshes, prairie ponds, and marshy tundra; also on prairies and grainfields during migration and in winter.

The mating dance of the Sandhill Crane is spectacular. Facing each other, members of a pair leap into the air with wings extended and feet thrown forward. Then they bow to each other and repeat the performance, uttering loud croaking calls. Courting birds also run about with their wings outstretched and toss tufts of grass in the air.

The nest is a large mound of grass and aquatic plants in an undisturbed marsh.The clutch contains two buff eggs, spotted with brown.

These cranes migrate in great flocks and assemble in vast numbers at places like the Platte River in Nebraska. Here it is possible to see what must have been a common sight when the species bred over most of the interior United States.

The Mississippi Sandhill Crane, G. c. pulla, is on the U.S. Endangered Species List. It is classified as endangered in Mississippi. Apparently the Sandhill Crane was always more numerous than the larger Whooping Crane, and the fact that it breeds mostly in the remote Arctic has saved it from the fate of its relative. But it is sensitive to human disturbance, and the draining of marshes has reduced nesting populations in the United States.


The Mississippi subspecies declined in the mid-20th century when its preferred savannah habitat was planted over with slash pines. Commercial and residential development, the building of highways, pollution, and other factors have caused further deterioration to the habitat. Most of the current crane population and its habitat are protected in the Mississippi Sandhill Crane National Wildlife Refuge. The Grand Bay National Wildlife Refuge to the southeast may be able to sustain a second population of cranes.[2]

Search for photos of Sandhill Crane in the gallery

Search for videos of Sandhill Crane on BirdForum TV