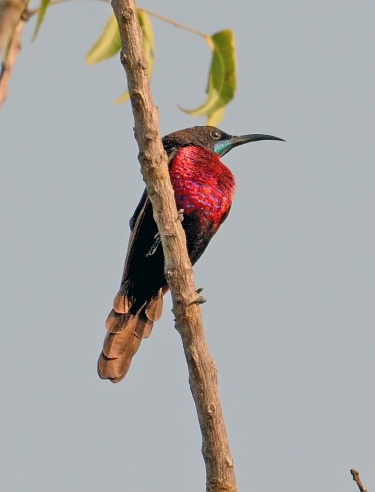 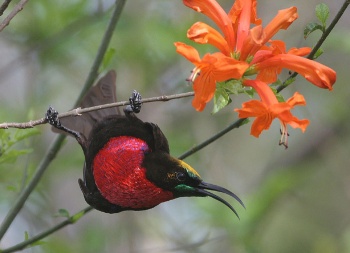 Male, Subspecies gutturalis - note the pollen on the crown and behind the eye.
Photo © by Kiki
Kruger National Park, South Africa, November 2005

This is one of the seven Sunbirds that have recently been moved into the genus Chalcomitra from the genus Nectarinia. 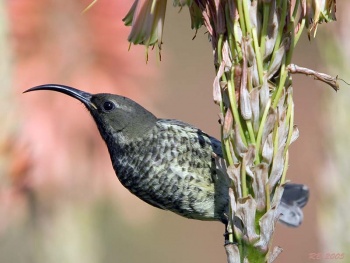 Chalcomitra senegalensis has 5 subspecies, variation being mostly in the colour of the underparts[1]: 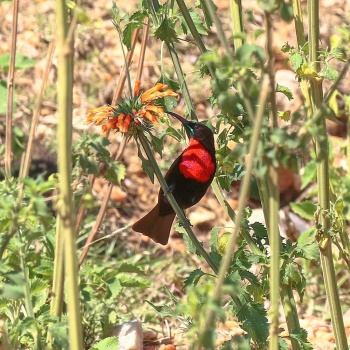 Often in groups at nectar sources where males frequently chase conspecifics and other Sunbirds. Also hunts insects and spiders, but usually alone. May hover to feed, but usually perches.

The male defends the the breeding territory. The nest is pear-shaped with a hood over the entrance hole, and suspended from a branch. It is built by the female using dry grass, stems, leaves and/or bark bound by spider web. Usually two eggs are laid and incubated by the female. Chicks and fledglings are fed by both parents for up to eight weeks. Parasitised by Klaas's Cuckoo and, less often, African Emerald Cuckoo and Dideric Cuckoo

Search for photos of Scarlet-chested Sunbird in the gallery