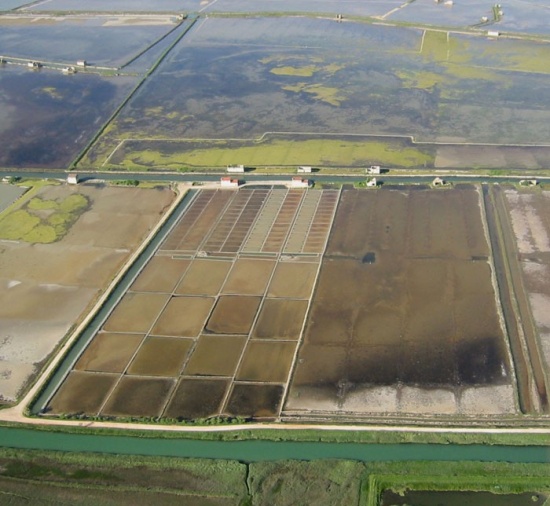 Secovlje Salina Nature Park covers 6.5 km2 and consists of two parts. Its northern part, where salt is still being harvested, is called Lera. From the Park's southern part, called Fontanigge, it is separated by the Grande � Drnica channel.

The Secovlje salt-pans are, together with the nearby Strunjan pans, the northernmost and still active salt-pans in the Mediterranean and amongst the very few, where salt is still produced in compliance with several centuries old procedures. The Secovlje Salina is exceptional in the great diversity of their fauna, flora and habitats.

The Fontanigge is distinguished for its great diversity of habitats. These are reeds, dry, bare or partially overgrown basins and islets in the salt-fields, mudflats and grasslands with thriving salt-loving plants (halophytes).

The Fontanigge is of particular interest to birds. For the Black-winged Stilt, Little Tern and Common Tern, Yellow-legged Gull and Kentish Plover, the Secovlje salt-pans are the only, or one of the most important, breeding sites in Slovenia.

The bird fauna is especially diverse in the spring and autumn months, when multitudes of birds stop in the pans on their migration routes between Europe and Africa.

The Secovlje Salina is home to more than 270 bird species, which either breed here or stop during migration or to spend the winter

The different life environments of the Secovlje Salina are closely-knit in the interchanging worlds of sea, brackish water, fresh water and land. At Lera, the habitats of plant and animal species are limited to diversely saline salt-fields, channels and levees.

A special feature of the plants in the pans are their halophytes. A characteristic invertebrate is the Saltwater Brine Shrimp, while the most interesting species as far as fishes are concerned is the Tooth Carp.

At Lera, salt is produced in accordance with the mediaeval tradition; the production procedure was only slightly modernised by the Austrians in 1904. Salt is being made in the petola, a layer of biosediment that prevents sea mud turning into salt and undesired ions building up in salt crystals. The petola is a special feature in the salt-making procedure, as it has been preserved only at the Secovlje and Strunjan Salina.

The Lera salt-pans are not only an exceptional technical heritage, but at the same time co-create this unique cultural landscape at the junction of land and sea.

At Fontanigge, salt-harvesting was abandoned in the 1960s. The tradition of salt-making, which originates from the 14th century, is depicted by the Museum of Salt-making situated by the Giassi channel and along Cavana 131.

With the ruins of houses once used by the salters, traces of salt-fields, levees and channels, the Fontanigge does not only speak of once highly practised salt-making activities on the northeastern coast of the Adriatic Sea, but is part of exceptional cultural landscape at the junction of land and sea.