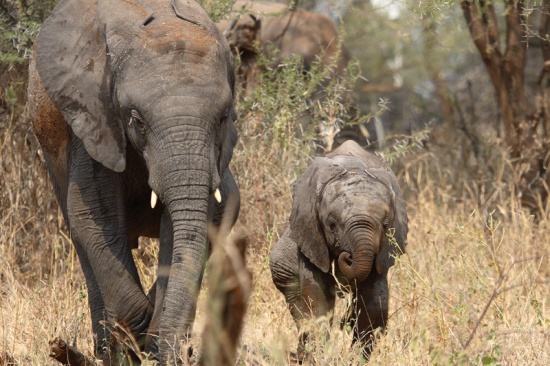 Although most famous for its mammals the Serengeti is also one of the best birding areas in East Africa with more than 520 species recorded.

The park covers more than 14,700km2 and adjoins Kenya's Masai Mara to the north. The main habitat in the park is open grassy plains with large rocky outcrops but there are also large areas of wooded savanna, scrub and riverine woodland.

Three Tanzanian endemics can be seen in the park: Grey-breasted Francolin, Fischer's Lovebird and Rufous-tailed Weaver as well as localised species such as Usambiro Barbet, Red-throated Tit and Somali Short-toed Lark.

Other plains specialities include Black-winged Lapwing, Yellow-throated Sandgrouse and Chestnut-bellied Sandgrouse, White-bellied Bustard and other bustards, Abyssinian Scimitarbill and both oxpeckers.

Saddle-billed Stork, Hadada Ibis and African Sacred Ibis, Goliath Heron and Black-headed Heron and various ducks and kingfishers are among the many birds attracted to the rivers and pools.

Raptors are numerous and around 50 species with Secretary Bird, Bateleur, Tawny Eagle and Martial Eagle among the most frequently seen.

Most visitors to the Serengeti come to see the largest concentration of large mammals anywhere on earth. More than a million Zebra, Wildebeest, Gazelle and other antelopes can be seen and these attract Lion, Leopard, Cheetah and Hyena in large numbers.

These are the most viewable large predators in the world and bring many thousands of visitors to the park.

For birders, Serengeti can be split into three main areas: the southern plains and kopjies, the western corridor and the central/northern woodlands. Visiting birders should aim to visit at least two of these areas, and bear in mind that many of the most interesting parts of the southern plains are not actually within the Serengeti National Park, but are instead within the Ngorongoro conservation area (NCA). The short grass plains of the south can appear rather devoid of birds, but this is the area for larks and wheatears, whilst during the rainy season many of these areas are essentially wetlands with Gull-billed Tern and White-winged Tern commonly hawking the low vegetation. During the northern winter the plains are also the place to find flocks of Caspian Plover. Also in these plains are some interesting wetlands - Lake Ndutu is a soda lake in the south, Lake Magadi a similar lake in the west, whilst Lake Masek and the Ndutu marshes (just inside the NCA) are somewhat less brackish and have slightly different species. These lakes (when full) offer a useful selection of wetland species.

Further north, the western corridor extends the National Park to a few kilometers short of Lake Victoria and holds an interesting mixture of woodland, thicket, riverine forest and smaller plains. The riverine forests are the places to find Schalow's Turaco and other interesting forest specials - as one head further west, more typically western species can be found along the Grumeti and Mbalageti rivers: Eastern Grey Plantain-eater and Black-headed Gonolek are two typical examples, hard to find elsewhere on the usual tourist circuit.

The northern woodlands (begining around Seronera in the centre of the park) offer interesting contrasts to the plains and riverine species of the south and west, harbouring typical bush species (though perhaps not in the abundance and diversity of some other Tanzanian National parks) and a few more interesting specialities such as Rufous-chested Swallow and the localised Buff-bellied race of the African Penduline-Tit. Wetlands and rivers in these areas also offer a range of interesting species (and the hippo pools at Seronera are always worth checking for Little Weaver!).

Accommodation with all facilities can be found at Seronera, Lobo and Ndutu Lodges (the latter in the neighbouring Ngorongoro Conservation Area) and there are also campsites within the park.

Search for photos of Serengeti National Park in the gallery

Search for videos of Serengeti National Park on BirdForum TV