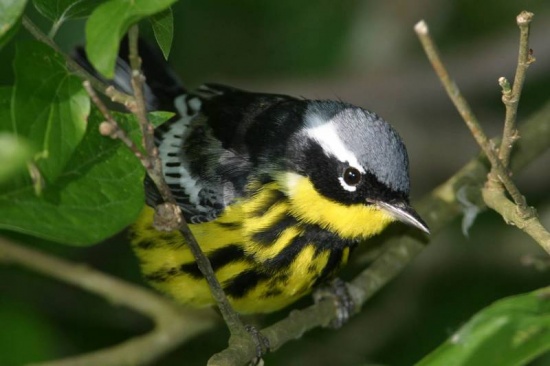 Canada from eastern British Columbia, southeastern corner Yukon Territory, south and central Northwest Territories east to Newfoundland and the Labrador south to northeast United States from northern Minnesota east to western Massachusetts and Connecticut south to Pennsylvania; also scattered locations in the Appalachians and Ohio. In migration found over most of the eastern United States and Canada. Winters to Panama and the West Indies. Rare but regular vagrant in the western United States. Accidental vagrant to Greenland (3 records) and Great Britain (1 record).

This is a monotypic species.
Formerly placed in genus Dendroica.

Moist coniferous spruce forests. In migration can be found in most woodlands and orchards.

They build a flimsy nest in conifer trees, and 3-5 eggs are laid. Both parents feed the young.

Diet includes insects and spiders, and berries when their preferred diet is unavailable.

Search for photos of Magnolia Warbler in the gallery