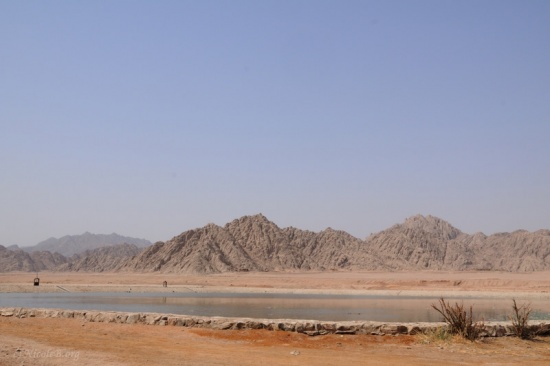 Photo by NicoleB
In front is a part of the Small Pools (Sewers) with mountains in the back. Habitat for a lot of migrating birds, October 2009

This town in the far south of the Sinai Peninsula is becoming increasingly popular as a birding destination and has a well-established reputation for providing some of the best snorkeling and reef diving in the world.

For birders the main attractions are the desert birds found in this very arid environment and the rare and sought-after seabirds of the Red Sea. In addition, the Sharm el Sheik area, and the sewage works in particular, attract many migrants.

Sooty Falcon is one of the special birds of this area, breeding on small islets just offshore it is often seen hunting on the mainland at dusk and regular spots are the sewage works and the lighthouse. Other raptors possible here include Lesser Kestrel and Barbary Falcon, Griffon Vulture, harriers and Long-legged Buzzard, Levant Sparrowhawk and various Aquila eagles.

However, larks and wheatears are the most characteristic desert passerines and here larks include Crested Lark, Bar-tailed Desert Lark and Greater Hoopoe-Lark and wheatears such as Kurdistan Wheatear, White-tailed Wheatear, Hooded Wheatear, Mourning Wheatear, Northern Wheatear and Desert Wheatear can be found.

Western Reef Heron and Striated Heron may occur anywhere along stretch of this coast but particularly in mangroves. Sooty Gull, Slender-billed Gull and Bridled Tern are among the seabirds to be found.

Waders occur in great numbers and variety and include such scarce species as Black-winged Pratincole, Spur-winged Plover and Marsh Sandpiper.

With increasing numbers of birders visiting the area it is inevitable that a long list of rarities is now building up. Species such as Caspian Plover, Oriental Skylark, Upcher's Warbler and Cinereous Bunting, Yellow-breasted Bunting and Little Bunting have all been recorded here.

Nabq Protected Area lies to the north of Naama Bay and hosts what may be the world's most northerly mangroves. An excellent area for waders, there is also a good selection of herons, gulls and terns, and migrant passerines can be numerous.

Undoubtedly one of the best areas is the sewage works to the north of the town which attracts ducks, waders and terns on passage and many other migrants including raptors and storks. The sewage farm and the plantation close by can be reached on foot from Sharm el Sheik by heading north from the Clifftop Hotel.

The entrance fee is 25LE per person and 5LE for any Egyptian accompanying you (they might try to charge you 25 though). The park opens at 9 am and closes at 5pm. (Info dates: March 2010)

To get your bearings you might either want to rent a taxi (no more than 200LE for 4 hours - and make sure the car is in good condition, the roads are bumpy) or you might want to go on a Quad tour. You can also walk from the main gate to the mangroves, most part along the beach. It's about 3km one way.

To reach it by car take the main road, direction north, into the circle and right onto a track opposite a petrol station. This area is under threat and may soon be lost.

There is another area of sewage works to the northwest of Naama Bay (called the small pools) which is a good birding spot. You find it, when you pass the airport and go about one more Km direction Nabq on the left side. You have to climb underneath the fence, but when someone asks you what you are doing there, you usually get away with the 'birdwatcher / tourist thing / loving birds'. Just be friendly, smile, maybe have a pack of cigarettes in your pocket.

The plantation and to the north the hotel gardens at Naama Bay attract many passerine migrants including various pipits, Bluethroat and warblers. 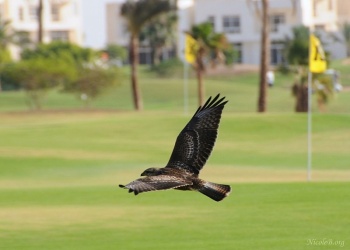 The Maritime Hotel at Naama Bay has an 18 hole golf course which with some ponds and attracts quite a few passerines. During passage periods and winter these ponds can hold a range of herons, Common Crane, Eurasian Spoonbill, Cormorants, Steppe Buzzard, falcons, storks, Hoopoe, Black winged Stilt, Redshank, Greenshank, ringed Plover & Spur winged Plover and a variety of ducks. s & all kinds of other migrators). You can usually access the golf course as a guest and probably rent a cart for around 85 LE (birds are less easy to be scared off while in a cart). The golf course usually opens around 6.30 am. (Info dates: March 2010) 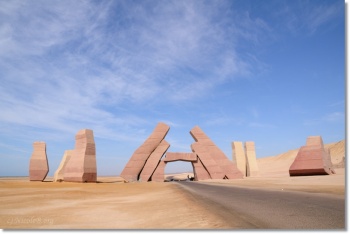 Ras Muhammad (or Ras Mohamed) National Park lies about 15km to the southwest of Sharm el Sheik at the southernmost point of the Sinai Peninsula (direction El Tur). Although famed for its reefs it is is also worth visiting for Sooty Falcon, waders and seabirds. The Park was declared a National park in 1983 with an area of 92km2. Since then areas have been added and the park is now covering an area of 480km2 (including Marine areas -> 345km2 and terrestrial areas -> 135km2). At Ras Mohamed two different water masses are coming together. The salty waters from the Gulf of Suez and the less salty waters from the Gulf of Aqaba.

A guided tour can be booked with various agencies all over Sharm el Sheikh either by boat (approx. LE 160) to different snorkeling locations or by Bus (approx. LE 120).

The park has an area of about 2ha with Mangroves. They grow in the salty water, storing water in their roots, transferring the Salt out via their leaves. Supposedly, the Bedouins take the roots, break them open and drink the fresh water that is stored in them (Not sure if that piece of information is true, since out tour guide was a bit full of himself). The type of Mangroves that grow here is called Avicennia Marina and belongs to the family of Rhizophoraceae. They have long roots that stick out of the water and help them breathe. I personally expected the Mangrove area to be bigger, but it was impressive nonetheless.

Ras Mohamed plays a big role for migration birds though, serving as a place for rest and nourishment.

If you don’t want to take a guided tour, you can always make a deal with a local taxi driver to get you there and around and wait for you. (For around 4 hours it should be no more than 200LE)

The park opens at 9am. If you take a taxi, make sure, the driver knows the park and can get you in before 9 am. It is usually not a problem to pay the entrance fee of 25LE per person and 5LE for the driver when you leave the park (They might charge you 25 for the driver and 5 LE extra - welcome to Egypt).

Don’t forget to bring your passport with a valid Visa, or you won’t be able to get past the Check point!

The park must be left by sunset, unless you are camping. Camping is allowed on one Site only in the park. You can ask at the entrance gate where to get that permission.

The five hour ferry from Sharm el Sheik to Hurghada can produce Red-billed Tropicbird and Bridled Tern as well as other more widespread seabirds.

A range of basic accommodation, from compounds with self catering apartments, over normal Hotels to luxurious hotels can be found at Sharm el Sheik. There is an international airport between Naama bay and Nabeq.

Sharm el Sheik forms an ideal base to explore other birding areas of southern Sinai such as the St. Catherine's Monastery and Ras Mohamed nature preserve park (see above).