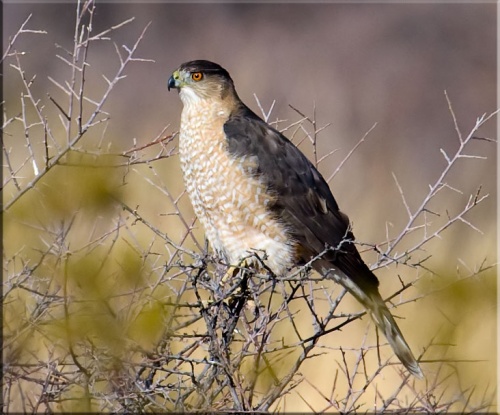 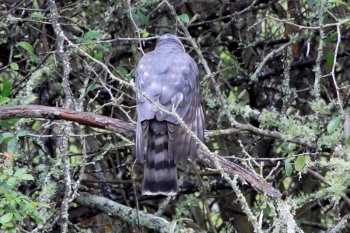 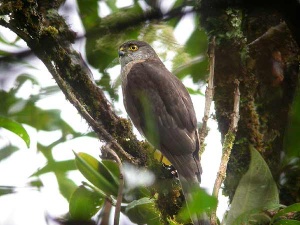 One of the smallest of the North American accipiters, at a length of 25-35cm (10-14"), and wingspan 51-71cm (20-28"). The females account for the high end of these size estimates; the usual rule of sexual dimorphism is reversed in Accipiters.
Iris color ranges from red, through orange to yellow depending on age and subspecies. Younger birds have brown or grey irides.

It has a long, slender body, with a small head and narrow, barred tail similar to that of the Cooper's Hawk, but differing from the latter in being squared or slightly notched at the tip (99% of birds - the rest have rounded tail); tail additionally has a terminal white tail band that is narrower than in Cooper's Hawk.

The back of northern subspecies is gray, except in juveniles, where it is dark, streaky brown. Breast is buffy with darker brown barring, coarse in the juvenile, but fine in the adult.

However, plumage is not very useful in identification, as all three North American Accipters can look very similar at various stages of life; size, wing shape, and flying characteristics are the most reliable indicators; look for relatively deep and rapid wingbeats in the Sharp-shinned hawk.

Can be confused with Cooper's Hawk in North America, especially as the female Sharp-shinned is almost the same size as the male Cooper's.
Chionogaster can be confused with Bicolored Hawk and Collared Forest-Falcon. Bicolored Hawk, which is unlikely to be found in the same habitat, is significantly bigger. The adult has grey underparts and the juvenile has more buffy underparts than is found on White-breasted Hawks. Collared Forest-Falcon can be found in the same habitat. It is considerable larger and in all plumages shows a paler collar that extends around the nape. 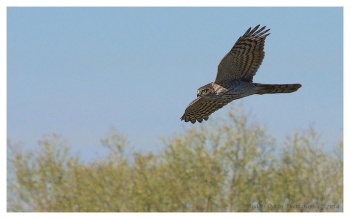 Occupies a broad band across Alaska and Canada in the summer, except for the arctic latitudes. Year-round in the central western U.S. from the Canadian border to Mexico and south through Mexico and to South America.

Northern migrants (mainly A. s. velox) can be found wintering throughout the U.S. and Mexico, excepting the colder climes of the central and eastern states. The more southerly subspecies are sedentary. 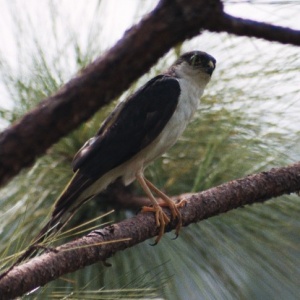 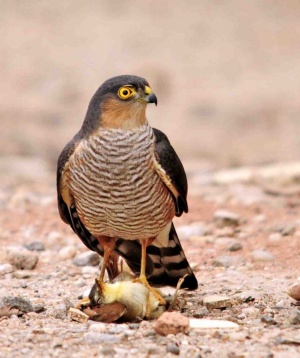 There are 10 sub-species recognized[1]:
Caribbean

The remaining three subspecies are considered to be separate species by some authorities. These are:

Typically found in open forests and forest edges, usually with some conifers. In the non-breeding season it can be found in almost any terrain, and in the USA in winter, it is frequent in wooded suburban and urban areas, especially where bird feeders are present in gardens. There is evidence from banding (ringing) studies, that females are more likely to use these human-dominated habitats in winter.

Solitary while hunting and nesting.

Carnivorous. Diet consists mostly of small birds, taken either on the ground or in flight. Will stake out bird feeders, patiently waiting for an opportunity to strike. Will also take small mammals and reptiles, and larger insects.

All known nests of the form White-breasted Hawk have been in Pinus oocarpa. Nest building is done by both adults, though most is done by the male. It begins as early as November and is complete by about mid April with 2 or 3 pale blue eggs with brown blotches being laid. Eggs in nest from about late March to mid May. Chicks fledge late May to July. All incubation is by the female.

The two main adult calls, heard mainly near the nest, are a long high pitched eeeeeee eeeeeee, which is often given by the female after receiving food or by juveniles begging for food, or a much faster series of notes ee ee ee ee ee that tends to be given when food is brought in or during times of alarm (chionogaster). The fast series of notes is similar in striatus and chionogaster, while it is generally given at a slightly slower rate the South American forms.

A. s. striatus has a more complex vocal repertoire than chionogaster, with a variety of specific calls for different activities that have not been recorded in chionogaster.

Vocalisations of the South American forms have not been studied in detail. Chicks in the nest sometimes give high pitched, whispered whistles swee swee swee when handled (chionogaster).

Search for photos of Sharp-shinned Hawk in the gallery

Search for videos of Sharp-shinned Hawk on BirdForum TV