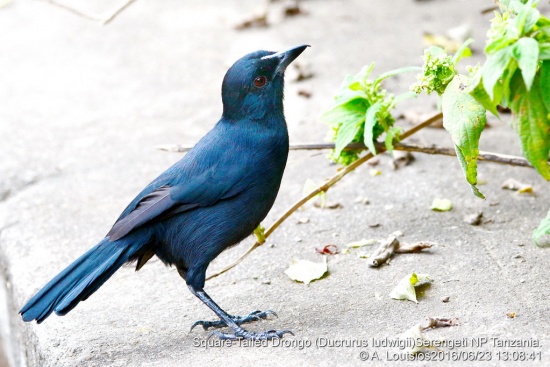 Length 19 cm; mass 18-41 g.
Adult: Glossy black; tail almost square. The bill is black with a hooked tip, the eyes deep red, and the legs and feet are black. Similar to Common Square-tailed Drongo but differing in:

Differs from Shining Drongo in significantly smaller size. Fork-tailed Drongo and Velvet-mantled Drongo are also bigger and have much more deeply forked tails. This species is also easily confused with the Southern Black Flycatcher as they are of a similar size. The Drongo, however, has a red (rather than brown)eye, a heavier bill, a different call, and is almost always found in the mid-stratum of forests (the Flycatcher prefers more open woodland).

Central Africa, from Nigeria (east of the Niger River, south of the Benue River) east to Uganda, South Sudan, and western Kenya, and south to northwestern Angola and southeastern Democratic Republic of the Congo.

Larger insects, including moths, locusts, beetles and termites. Hawks for insects from a perch.

Hammock nest relatively small for a drongo made from large flakes of lichen, leaf petioles and dry plant stems attached to branches with cobweb. Clutch or 2 or 3 variably colored eggs incubated by both sexes.

Search for photos of Sharpe's Drongo in the gallery