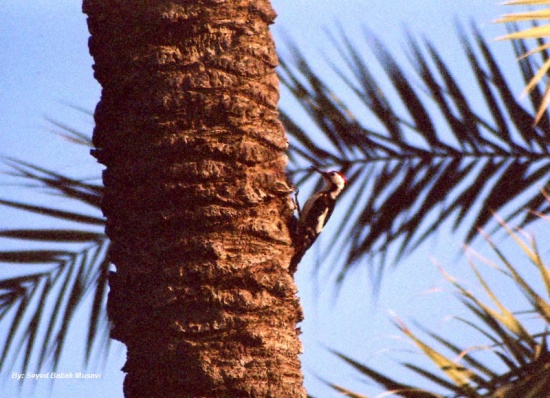 Separated from similar White-winged Woodpecker by alck of black bar behind cheek. Has more white on scapulars and broader wite barring on wings then Himalayan Woodpecker and Great Spotted Woodpecker. Smaller than similar Syrian Woodpecker. Note also red crown, black stripe from side of neck to mantle and shorter black stripe on breast.

This is a monotypic species.
Hybrids with Syrian Woodpecker occur rarely.

Found in thorn-scrub, riverine forest and desert wadis with acacias. Also in roadside trees, irrigated plantations, palm stands and gardens.
Occurs mainly in lowlands but up to 1600 m in Salt Range in Pakistan and maybe higher in Baluchistan.

Feeds on ants and larvae of wood-boring beetles.
Forages singly on trunks, branches and twigs of trees, bushes or fence posts. Also often on the ground and on fallen trees. Hammers and probes like other woodpeckers.

Breeding season from March to April. The nest hole is excavated by the male and the female in a trunk or a dead branch 1 to 4 m from the ground. Lays 3 to 4 eggs.

A resident species. A 19th-century record from northwest India indicates a long-distance dispersal.

Search for photos of Sind Woodpecker in the gallery