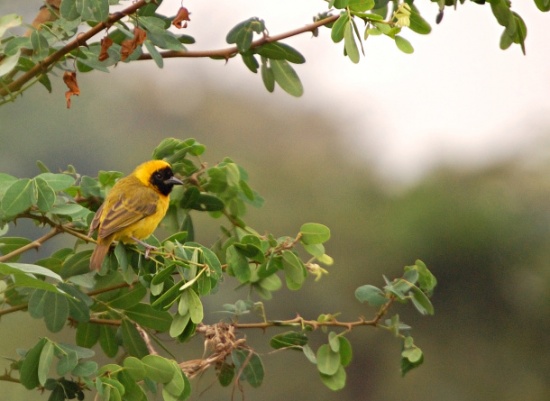 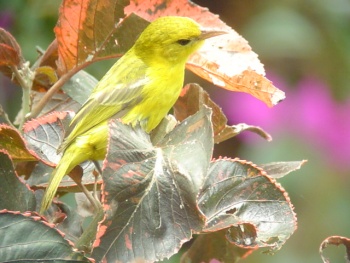 Females without black on head but with yellowish-green forehead to nape, cheek and ear-coverts and clear yellow supercilium. Juveniles like females but browner above and duller yellow below.

The proposed subspecies tuta (Tanzania) is normally not recognized.

Found in papyrus swamp and other tall vegetation near lakes or in wetlands. Forages also in trees, bushes, rice fields and mangroves, even in gardens.
Usually below 1700 m, up to 2350 m in eastern DR Congo.

Usually seen singly, in pairs or in flocks.

Feeds on insects. Forages in trees, gleaning and prying with great agility.

Breeding differs through range. A monogamous species, nesting in colonies with usually fewer than 20 nests, rarely more. Nests sometimes alongside Black-headed Weaver or at edges of mixed colonies of Village Weaver and Vieillot's Black Weaver. The nest is ball-shaped and made of strips of grass or papyrus leaf. It's attached to papyrus heads, palm fronds or a thorny branch. Lays 2-3 eggs. Sometimes parasitized by Diederik Cuckoo.
Old nests of this species are used by Dusky-blue Flycatchers.

Search for photos of Slender-billed Weaver in the gallery