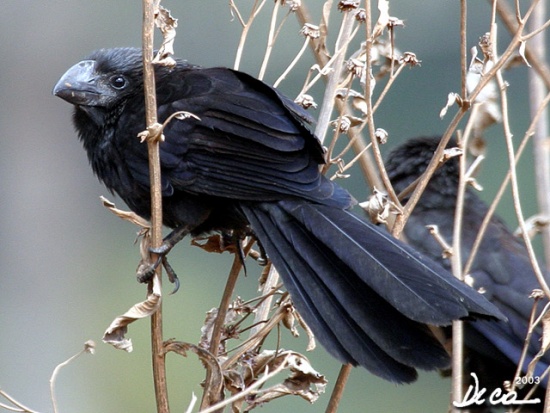 35 cm (13¾ in)
Overall black with a faint bluish iridescence on neck, wings and tail, and a strong, vaguely parrot-like bill. Tail is long and rounded, and the flight looks weak with rapid wing-beats alternating with glides. Feathers on neck and head often are broadly edged in medium grey without the iridescence, at least on birds from the eastern Caribbean. 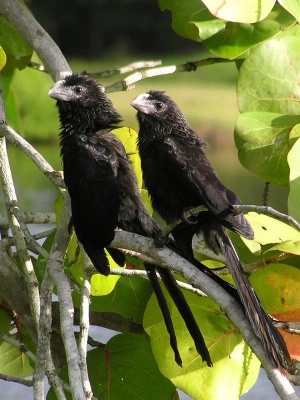 Easily mistaken for the Groove-billed Ani (Crotophaga sulcirostris) in the area of overlap. The Smooth-billed is slightly larger and its bill has a more arched culmen (esp. noticeable at basal part of culmen, where downward curve towards forehead is stronger than in Groove-billed) and no grooves in the upper mandible. They can also be separated by the voice.

Confusion also possible with the Greater Ani, which is larger, longer-tailed, longer-billed, has a more iridescent plumage and yellow eyes (careful; juv. Greater Ani with reduced iridescence and dark eyes similar to those of the Smooth-billed).

The Smooth-billed Ani is found from Florida, USA (accidental records further north), south through the West Indies and large parts of South America, to northern Argentina and Uruguay, and west to Panama and the Pacific lowlands in Ecuador.

Even with the weak flight is still thought to make periodic invasions from the Caribbean to Belize Cays, but otherwise absent from most of Central America. Also absent from the Andean highlands and the Pacific coast of Peru. 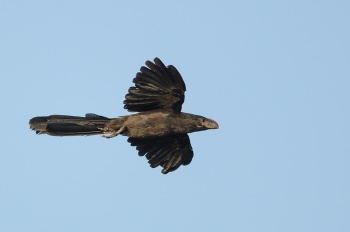 Occurs in several habitats, mostly open areas and lowlands or even in areas disturbed by human activities, including second-growth forest.

They are often seen in large groups, jumping from perch to perch in low branches.

Its diet consist mainly of insects, but they can be seen eating some fruits. They often vocalize perched on high branches, usually the highest.

As most cuckoos of the Americas, it is not a parasitic, but builts its own nest.

They live in clans where helpers assist in rearing the new young of the season.

Search for photos of Smooth-billed Ani in the gallery

Search for videos of Smooth-billed Ani on BirdForum TV