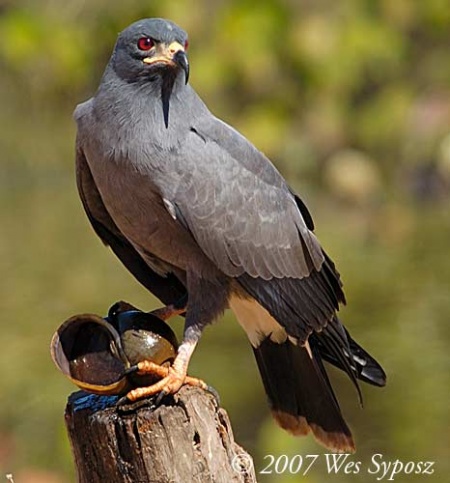 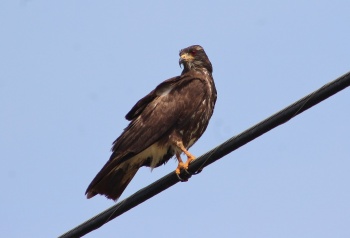 Female: Browner with buff-streaked underparts
Immature: Similar to female, but legs brownish and eye brown, with more streaking on breast.

Easily identified by bill in most of its range. The Slender-billed Kite (local near water in forested areas of South America) has a similar bill and resemble the male Snail Kite in plumage, but is shorter-winged and -tailed, has no white rump, crissum or tail-base and yellow eyes. Immature Slender-billed Kite has darker brownish eyes, but three narrow white tail-bands (incl. tip) unlike any plumage of Snail Kite. 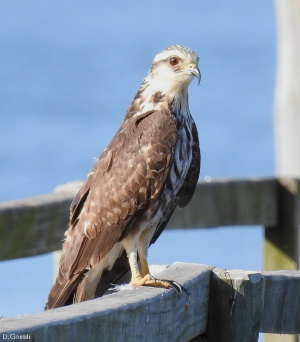 Resident in North, Central and South America.
In North America breeds only in the Everglades of southern Florida.
In the Caribbean breeds in Cuba and the Isle of Pines.
Central America: In Mexico found in Colima, Jalisco and Nayarit on the Pacific side, and from Veracuz and Oaxaca to Chiapas and Quintana Roo (on both slopes from about the Isthmus. From there it is found in all countries through Panama, but rare in several areas.
In South America breeds west of the Andes south to western Ecuador and throughout the east as far south as Uruguay and north-central Argentina.

An additonal subspecies, levis, is not generally recognised and is commonly included in plumbeus.

As suggested by its name, feeds almost entirely on snails (e.g. Pomacea snails.). Flies low and slowly over marshes in search of its food.

Search for photos of Snail Kite in the gallery