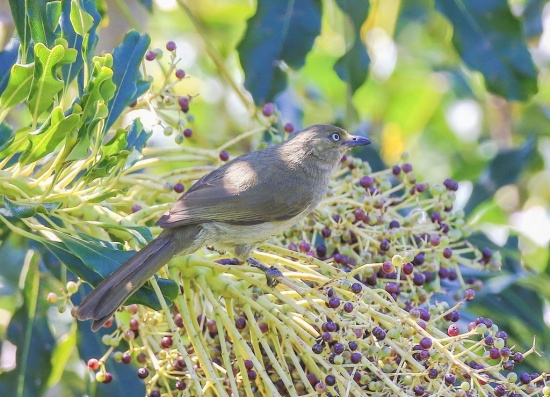 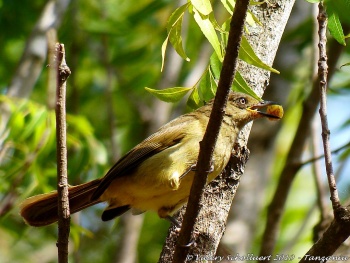 Like adult but brighter yellow below, olive-green wash across breast, richer olive-green above, and have dark eyes.

Northern and eastern races are very yellow below and could be confused with Yellow-bellied Greenbul which differs in its dark red, not white iris.

Other former members of this genus have been moved to other genera leaving this species the sole member of Andropadus.

This is a polytypic species with four subspecies:[1]

They tend to sit still high in the canopy blending into the vegetation.

The diet consists mostly of berries and other fruit, with the addition of insects and small snails.

This species sings loudly and persistently from high in the canopy but can be maddeningly difficult to see. '*Call' a penetrating rising "willie." '*Song' given throughout the year is is a distinctive piercing "weeeweee" followed by a liquid chortle.

Sedentary. Flocks may wander locally in search of food.

Search for photos of Sombre Greenbul in the gallery