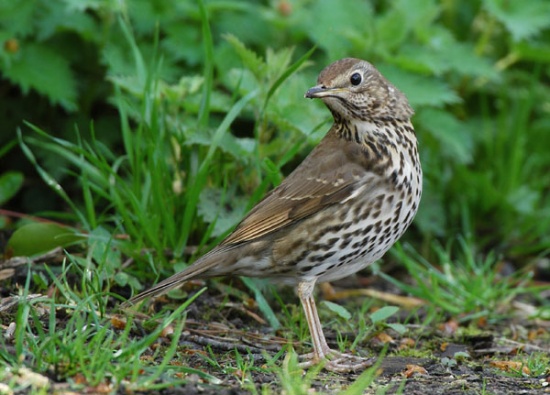 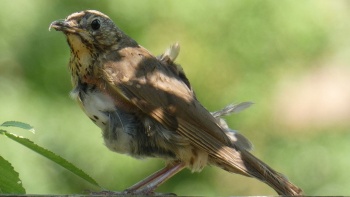 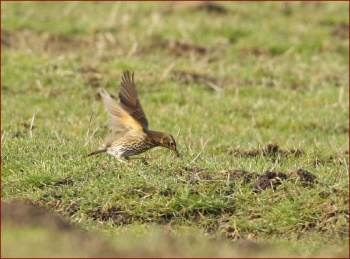 Mistle Thrush is obviously larger, has greyer upperparts and the spots are round. Female Eurasian Blackbirds is slightly larger and much darker brown. Redwing is similar size, and has prominent white supercilium, and red underwing. Chinese Thrush is very similar, differing only in slightly more prominent vertical bars on face and larger breast spots, but does not overlap in range.

Breeds throughout Europe south of about 70°N, but only at high altitudes in the Mediterranean region; also western Asia east to Lake Baikal in central Siberia, and the Caucasus and Alborz mountains of Iran in southwest Asia.

Most of the birds winter further south and southwest (south to northern Africa), though populations in western and southern Europe are partly resident. In Britain, most of the breeding population (T. p. clarkei) leaves for the coldest parts of winter for France and Spain, but some (around 20%, mainly males) remain through the winter, with the rest returning in February-March; many nominate T. p. philomelos (often distinguishable by their slightly greyer plumage) also arrive in autumn from Scandinavia in late September to early October, some remaining to winter, others moving on to France and beyond.

A vagrant in Iceland (annual), Svalbard, the Azores, Madeira, and Mauritania.

The species has been introduced to New Zealand, where it is common and widespread, and Australia, where a small population survives around Melbourne.

Most closely related to the Chinese Thrush of central China.

They do not form flocks, although several birds may be seen together where there is suitable habitat, especially in the winter. They often appear to be rather tame.

The twiggy nest is lined with moss or grass. The clutch consists of 3 to 5 blue eggs with dark spots. They are incubated for 14-15 days, fledging after a further 2 weeks. There may be 3 broods in the season which lasts from March to July.

The diet consists of snails, insects, worms, fruit and berries. To eat the snails, they find a suitable stone which is used as an "anvil" to smash the shell.

Search for photos of Song Thrush in the BirdForum Gallery

Search for videos of Song Thrush on BirdForum TV