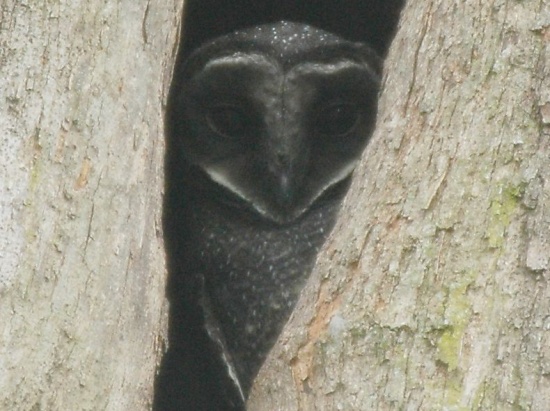 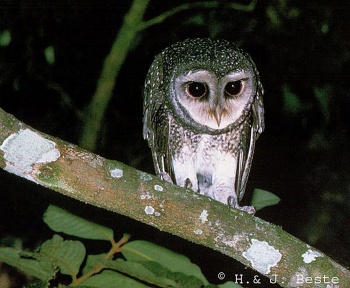 Sexes look similar but the female is usually slightly larger.

The latter was long considered to be a full species, Lesser Sooty Owl, the other two subspecies were known as Greater Sooty Owl. These two forms have an unusual "leapfrog" distribution in that the Lesser is surrounded by Greater Sooty Owl both to the north in New Guinea (subspecies arfaki) and to the south in mainland Australia (subspecies tenebricosa); other species that show leapfrog distributions are Australian Logrunner/Chowchilla in the same area and Grey Trembler/Brown Trembler in the Caribbean. A DNA analysis of the three Sooty Owl populations found small differences between the three populations (0.6 - 0.8 %), in spite of especially size differences. This lack of DNA sequence difference has been seen as an argument against keeping the two Sooty Owls as different species. Reference on the DNA analysis: J. A. Norman, L. Christidis, L. Joseph, B. Slikas & D. Alpers (2002) Unravelling a biogeographical knot: origin of the 'leapfrog' distribution pattern of Australo-Papuan sooty owls (Strigiformes) and logrunners (Passeriformes). Proceedings of the Royal Society of London Series B. Biological Sciences. 269, 2127-2133. (Full text available online).

multipunctata is found in rainforests.

A strictly nocturnal bird. Hunts in clearings and near roads, but also inside forest.

Diet includes small mammals, but also insects and some birds.

The nest is usually a large hollow in the trunk or a main limb of a living tree, often Rose Gum. The female may occupy the hollow for many weeks before laying, going out briefly only once or twice each night. 1-2 eggs are laid. Incubation is 40-42 days and the young have downs of sooty grey. Fledging is at about 3 months.

Search for photos of Sooty Owl in the gallery