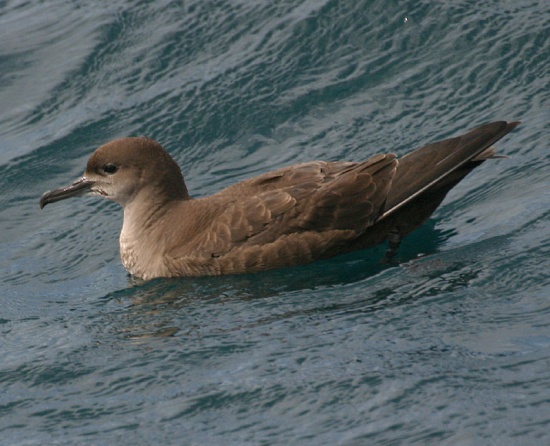 Photo by Joe Cockram.
Photo taken: Atlantic Ocean, not too far from Scilly. 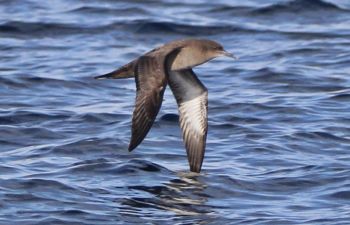 In the Pacific Ocean, three confusion species occur:
Flesh-footed Shearwater differs in having pale pinkish feet and stout, pale-based bill, and lacking the pale underwing bar.
Wedge-tailed Shearwater shares a slender, dark bill but also has pale pinkish feet, and a longer tail.
Short-tailed Shearwater is the trickiest to distinguish, sharing a slender, dark (though shorter) bill and dark feet, but usually lacks Sooty's pale underwing bar. Some individuals with a slight pale underwing bar can be impossible to distinguish at any other than very close range.
Identification is much simpler in the Atlantic Ocean, where only the markedly smaller Balearic Shearwater has a superficially similar colour pattern.

They breed from October to February in small islands in the south Pacific and south Atlantic Oceans, mainly around New Zealand and southeastern Australia in the Pacific, and the Falkland Islands and Tierra del Fuego in the Atlantic. During the non-breeding season, they migrate north to the northern Atlantic and Pacific Oceans, reaching latitudes of 60-65°N. It migrates further north than any other southern hemisphere breeder, and is regular in the North Sea in August-September (unlike e.g. Great Shearwater).

This is a monotypic species1.
Formerly placed in genus Puffinus.

Islands; oceanic when not breeding.

The diet includes fish and squid, taken at the surface or by plunge diving to at least 60 metres depth. They will also follow fishing boats to take fish scraps thrown overboard.

They breed in huge colonies and the female lays 1 white egg. They nest in burrows lined with plant material which are visited only at night to avoid predation by large gulls.

Search for photos of Sooty Shearwater in the gallery