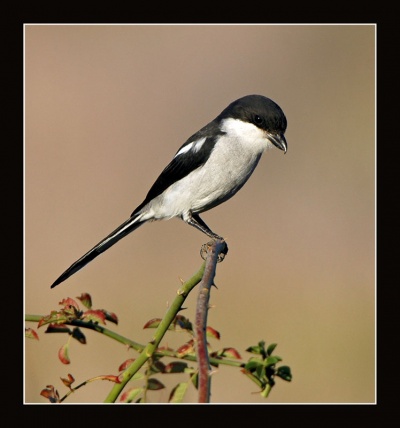 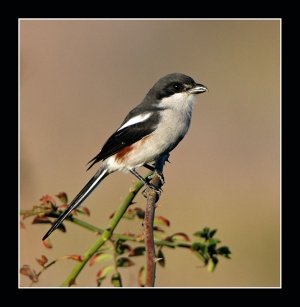 Grayish brown with gray scaling below.

Northern Fiscal is similar but has cleaner white (less grayish) underparts and more white in its tail. Fiscals are conspicuous, often hunting from exposed perches. Black-backed Puffback and boubous are also black and white but are shy, skulking birds. Male Fiscal Flycatcher is shorter-tailed but lacks white scapular stripes and white outer rectrices.

Formerly included in Common Fiscal together with Northern Fiscal. 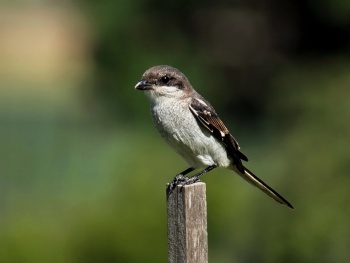 This is a polytypic species with 5 subspecies divided into two groups[1]: 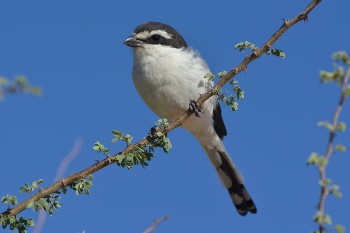 The subspecies marwitzi from Tanzania is sometimes considered a full species, Uhehe Fiscal.

Found in woodland and open savanna, shrubland with scattered trees. Common around cities, gardens, parks and along roadsides.

The Southern Fiscal is raptorial and feeds on a wide range of invertebrates, notably insects and small vertebrates. Vertebrates comprise a very small portion of its diet and most of its prey are those considered pests to the farmer or gardener. Its main hunting method is sit-and-wait foraging and about three-quarters of its day is spent on the lookout for prey. It also hovers before pouncing and chases and flushes prey out of undergrowth. When flying insects are numerous, such as when winged termites emerge from the ground, the bird will hunt on the wing and in very windy conditions when flight becomes impossible, it will glean prey from foliage.

Southern Fiscals breed mainly between the months of August and January, with most eggs being laid in September and October. They lay three or four pale, speckled eggs, which hatch about two and a half weeks after being laid, usually over a period of two days and often one or two eggs fail to hatch.

Search for photos of Southern Fiscal in the gallery