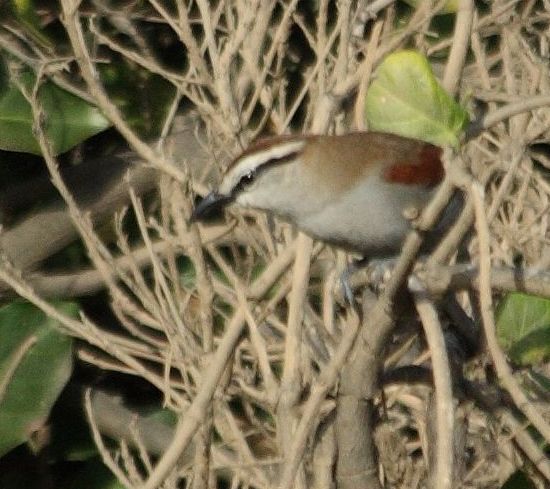 Adult: Has a brown crown, grey to white eyebrow and black eyestripe. The back is olive brown and the rump is olive grey. The tail is black and brown, tipped white, and the wings mainly rufous and olive-brown. The underparts are grey except for the the chin and throat, which are greyish white.

Juvenile: Similar to the adult, but more olive above. The eyebrows are more buffy and the tail is tipped buff.

There are three subspecies based on differences in bill length, shade of rufous on upperparts and shade of grey on underparts:

Forages singley or in pairs, often on the ground, for invertebrates, fruit, seeds and molluscs. Generally stays close to, or in, dense cover. Flies with rapid wingbeats alternating with glides.

Breeding: Monogamous and territorial. The nest is a cup of plant material well-concealed in a bush, usually less than a metre above the ground. Two to three eggs are laid August to December. Parasitised by the Jacobin Cuckoo.

Search for photos of Southern Tchagra in the gallery