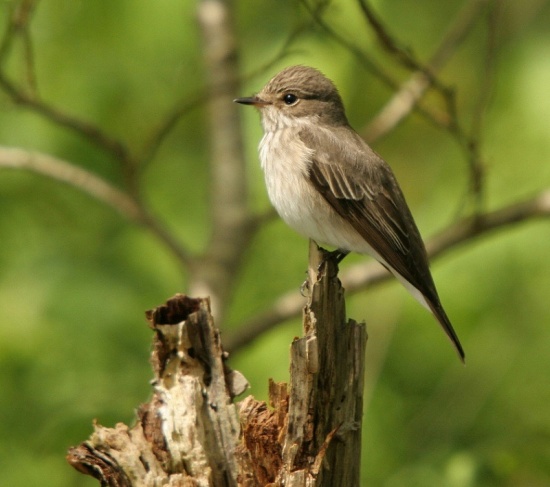 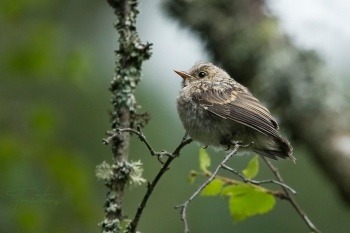 L 13.5-14.5 cm (5¼-5¾ in)
Small to medium sized, rather slim passerine. Lacks any obvious features though in profile it has a rounded crown and the head appears rather large. Greyish brown upperparts and off-white underparts with dark streaking on the breast and sides of throat as well as the forehead and forecrown.
It has a dark bill and black, short legs, dark eyes with narrow pale eye-ring.
Sexes are alike.

Found in Europe, North Africa and east to Siberia, the Caucasus, Central Asia and Mongolia to south-east Transbaikalia.

Found throughout Britain and Ireland but are far more scarce in the north of Scotland and the west coast of Ireland. Their numbers have declined terribly since the sixties. A summer visitor that winters in Africa.

Accidental to Alaska with 1 record. 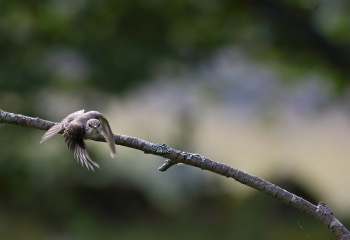 There are seven subspecies[1]:

Breeds in gardens, parks and in forests, often appearing to prefer spots with small glades and openings among tall deciduous trees.

Has an upright posture and usually sits with tail flicking whilst it watches for flying Insects, then quickly flies out to snap it's prey and returns, often to the same tree branch, post or wire fence.

Nests in recess on tree trunk or building, often against a wall on branch of climbing shrub. Will also readily occupy open-fronted boxes.

The nest is made up of twigs, moss and grass and is then usually lined with hair, wool and feathers. One or two clutches of whitish, or blue-grey eggs, with reddish brown blotches are produced. They are incubated for about 2 weeks, the young being fed by both adults, mainly on small flies. They fledge after a further 2 weeks.

The breeding season runs from May to August.

Search for photos of Spotted Flycatcher in the BirdForum Gallery

Search for videos of Spotted Flycatcher on BirdForum TV