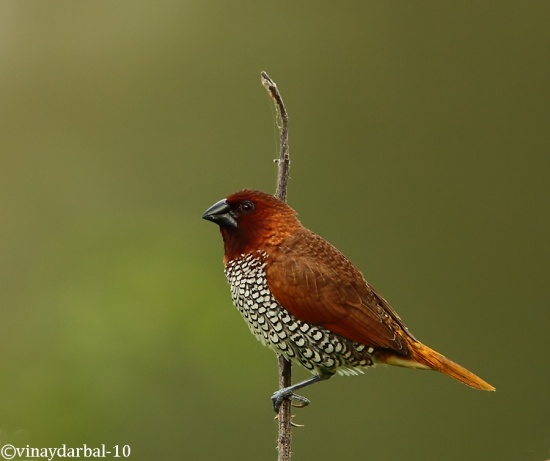 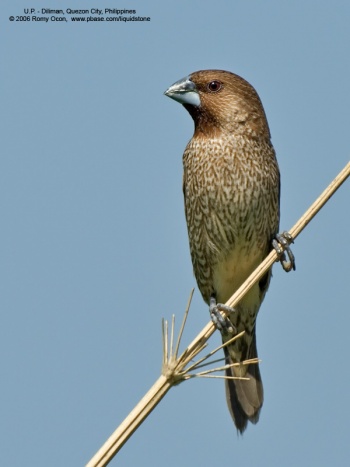 10–12½ cm (4-5 in)
Adult: both sexes identical with cinnamon-brown back and head, at least sometimes with darker face and throat. The breast and the rest of the underside is mostly white with each feather showing narrow borders and stripes in brown producing a scaly pattern. Pattern varies with the subspecies. Sometimes scales are single, sometimes doubled on each feather. Also varies in extent of scaling in the throat area.
Juvenile is slightly lighter than the adult on the back, while the underside is buffy, gradually lighter towards undertail coverts and lacking in the scaly effect. Bill is black in both adult and juveniles.

Juveniles are similar to juvenile Chestnut Munia, but distinguished by Scaly-breasted's black rather than bluish bill.

The natural distribution is from Nepal through India and Sri Lanka and east from there through China and the far east to Philippines and Indonesia.

In addition, this species is common in the pet trade, and has generally established populations that spreads from wherever escapes have happened. They are therefore present along the east coast of Australia, the Caribbean and the USA, just to mention a few of the locations where they have been introduced.

Twelve subspecies share the original range. Birds in the pet trade are unlikely to come from any single subspecies, so introduced populations likely represent a mixture; even so, birds in Australia and the Caribbean do not look identical. 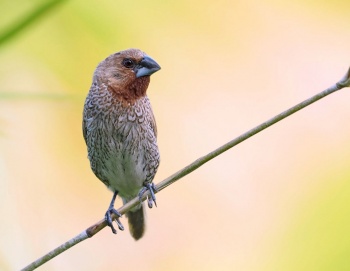 Lowland open areas with seeding grass. Has been observed at heights around 900m (3000 ft) on the approach to the Himalayas in Himachal Pradesh.

Their main diet consists of grass seeds and rice grains. 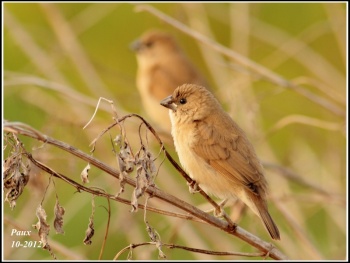 Nest is a loosely constructed ball with a low side entrance. Outside made of flowering grass heads, leaves and twigs. Internal chamber lined with fine grass. Occasionally will use old nest of another bird. Clutch is 3-6 eggs with larger clutches suspected of being the result of two or more females laying in the same nest. Nesting can occur at any time of the year if conditions are favourable, and the nest is normally found at moderate height in a bush or tree.

Listen in an external program Scaly-breasted Munia sound clip
Recording by Alok Tewari
Gurgaon Rural, Haryana, India January-2015
A flock sitting on dry Acacia branches making faint calls and flies away. The communication calls were very faint. They were made while sitting and also when birds flew away.

Mostly resident with local movements in response to ripening grain.

Search for photos of Scaly-breasted Munia in the BirdForum Gallery

Search for videos of Scaly-breasted Munia on BirdForum TV