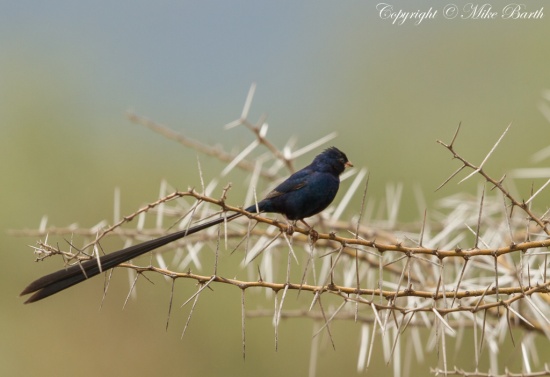 Juveniles are similar to females.

Female and non-breeding male differ from other Whydahs by tiny pale bill, grey legs and more definite eyestripe. They also have a less strongly patterned face, less rufous on head and upperparts and a smaller grey bill than Pin-tailed Whydah.

Feeds on small grass seeds. Forages on the ground. Searches for seeds by rapidly kicking aside topsoil with one foot and then the other, then hops backwards and pecks.

A brood-parasitic, main hosts are Black-cheeked Waxbill and Black-lored Waxbill. Lays in May in South Sudan, season June to September at Lake Baringo (Kenya) and May to July at Lake Victoria. Lays one or two eggs in a parasitized nest.

Search for photos of Steel-blue Whydah in the gallery