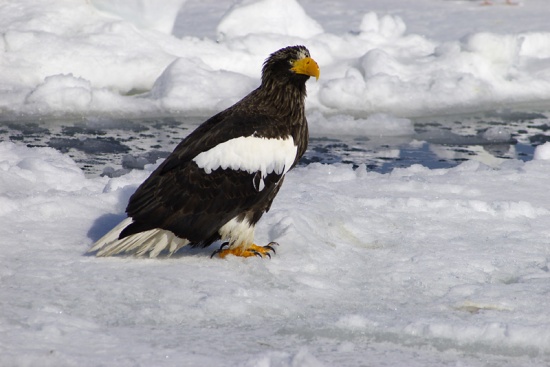 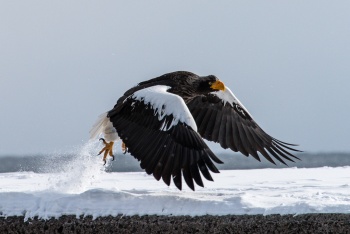 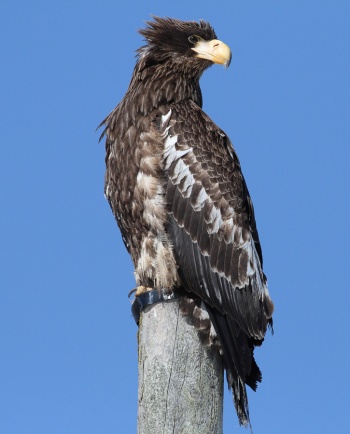 North-east Asia: breeds on the Pacific coast of north-east Asia and northern parts of the Korean peninsula, wintering mainly in Korea and Japan, particularly on the Shiretoko Peninsula of Hokkaido. Rarely wanders to China and a vagrant to Pribilof and Aleutian Islands. In the Western Palearctic recorded in Germany in March 1991 and presumably the same bird in Finland in April-August of the same year and again in May 1992. In May 1993 another or the same was reported from Sweden and again in June-July in Finland. In September 1993 a Steller's Sea Eagle, presumably the same, was found dead in Estonia. This is a rather unlikely vagrant to Europe and all reports are generally thought to involve a single escaped bird. However, the species is rare in captivity and no losses were reported.

A dark form with white tail but lacking white shoulders which occurs with extreme rarity is sometimes regarded as a subspecies, niger but has recently been confirmed as a colour morph2,4 .

Breeds on sea-cliffs or in tall trees, winters on coasts or on rivers where salmon come to spawn. Often gathers in some numbers on gravel banks in rivers or on ice-floes.

It builds several aeries high up on trees and rock. The first white-green egg is laid and incubated for 39 - 45 days. At about ten weeks, the young birds learn to fly. They reach sexual maturity at 4-5 years. 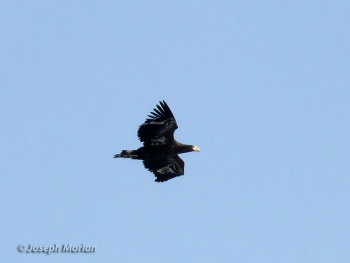 Search for photos of Steller's Sea Eagle in the gallery