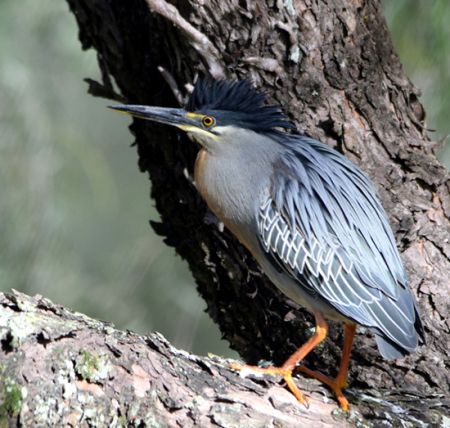 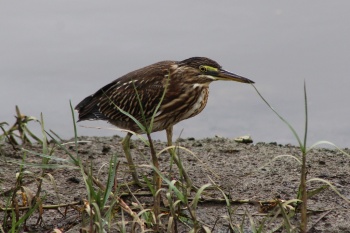 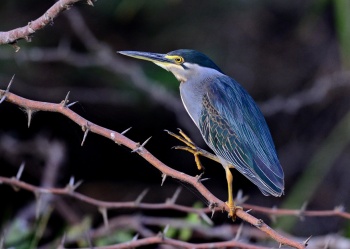 A dumpy little heron with a large head and bill.

General colour blackish green; grey below; throat white; down foreneck dependent on subpecies; erectile feathers on crown, at rest extending down nape, scapulars and wing-feathers margined with white, or buffy-white ; hind-neck, sides of face, abdomen, sides of body, axillaries, and under wing-coverts grey, somewhat paler on the vent and under tail-coverts ; throat and fore-neck white with an irregular line of dark chestnut-brown feathers down the middle which spreads out and becomes pale rufous on the breast ; outer edge of wing white.

Gender can be told by colour of the legs, orange or red in males and yellow in females according to Forbes-Watson (1969)[3], though this statement has rarely been repeated. 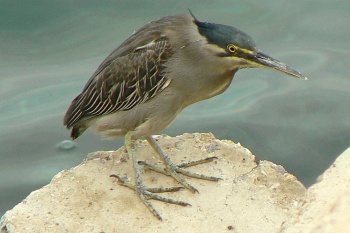 Two Australian subspecies, B. s. macrorhyncha and B. s. stagnatilis, occur in both a grey and a rufous morph, while the normally grey nominate B. s. striata also occurs in a rare rufous-necked morph (confirmed for Peru and Bolivia; possibly also elsewhere).

Adults are generally distinctive. Rufous-necked morph of nominate race is paler, and has a greyer belly than the Green Heron (limited overlap between the two in coastal Venezuela, Trinidad and Tobago, coastal northern Colombia and eastern Panama). 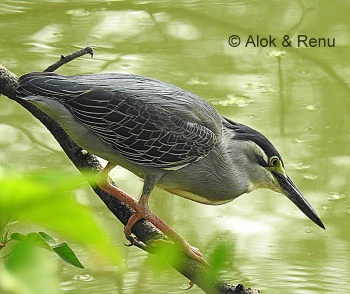 Widespread in South America (except far south and the Andes), sub-Saharan Africa (except far south), warmer parts of Asia, coastal northern and eastern Australia, and islands in the Indian Ocean and Pacific Ocean. See Subspecies, below, for further information on range. Most subspecies are sedentary or with local dispersal only, but two Asian races, B. s. amurensis and B. s. actophilus, migrate south following breeding.

Generally common and widespread. Some localised subspecies are rarer, and it has been estimated that only around 100 individuals remain of the subspecies B. s. patruelis. 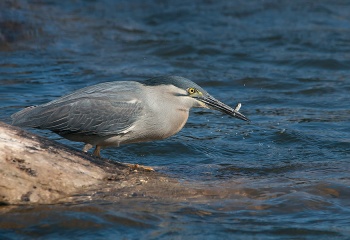 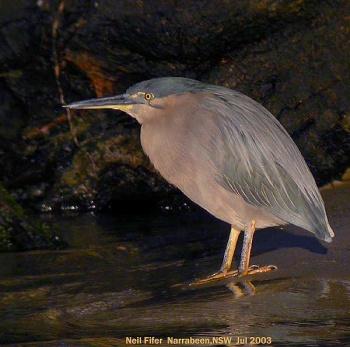 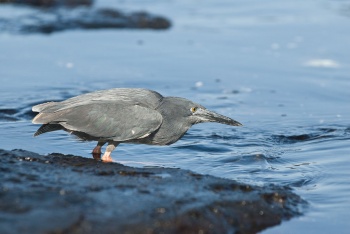 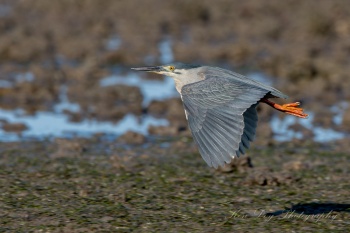 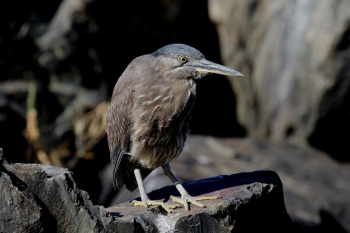 The species shows a preference for forested water margins such as mangrove-lined shores and estuaries, or dense woody vegetation fringing ponds, rivers, lakes and streams.
Other suitable habitats include river swamps, canals, artificial ponds, salt-flats, mudflats, tidal zones, exposed coral reefs, reedbeds, grassy marshland, pastures, rice-fields and other flooded cultivation. In plains to an altitude of 750m, occasionally up to 1300m.
There have also been a few records in savannah woodland, where the bird would hunt tadpoles in shallow pools, far away from permanent water.

This species is extremely territorial and often forages and nests alone; occasionally in good conditions the birds nest in loosely spaced groups of 5-15 pairs, or even more rarely, in very large groups of several hundred pairs. This territoriality extends to their foraging behaviour, where birds will stand on floating debris, hunting for trapped insects, until the debris leaves their immediate territory, at which they will return to the bank. Often seen watching water from a shallow perch for food, also sometimes in rice fields. When hunting the birds will occasionally use 'bait' dropping a feather or leaf on the water and spearing the fish that come to investigate. There have also been reports of birds dropping bread scraps in the water.

Another interesting foraging technique is using a floating piece of debris as a 'base' from which they can float into deeper water, and have been observed diving into the water to a considerable depth in order to catch a fish. Although they forage throughout the day their activity spikes in the evening and morning. They nest near water in broadleaf forest or shrub canopy shelter.

Young Birds will occasionally give a display if threatened, which consists of stretching their neck, and pointing their bill up. An additional threat display is detailed and illustrated here. Adults will freeze when disturbed; standing motionless with their bills at 45°. Often relatively tame around inhabited areas.

The breeding season varies according to the location, but in the tropics occurs during heavy rains. Nest is a small, shallow structure of twigs, placed hidden among the braches of trees and shrubs (especially mangroves Rhizophora spp. and Avicennia spp., but also other trees) between 0.3 and 10 m above the water, ridiculously small for the bird, normally being a few dry sticks put together. Clutch of 3-5 eggs, both the male and female co-incubate, through a period of 20-22 days. Eggs are pale blue and measure 36x28mm. In China the breeding season is April to September, wintering around the coastal areas of Jiangsu, but numbering less than one hundred.

Search for photos of Striated Heron in the gallery

To search for Lava Heron

Search for photos of Striated Heron in the gallery

Search for videos of Striated Heron on BirdForum TV