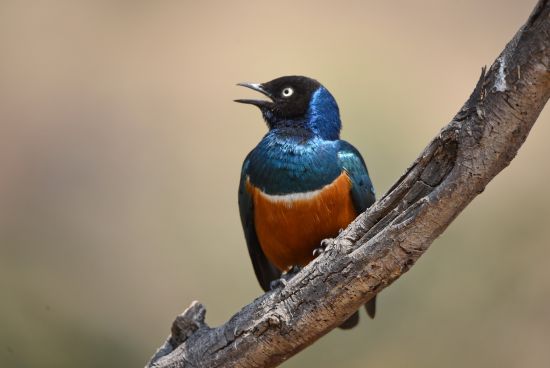 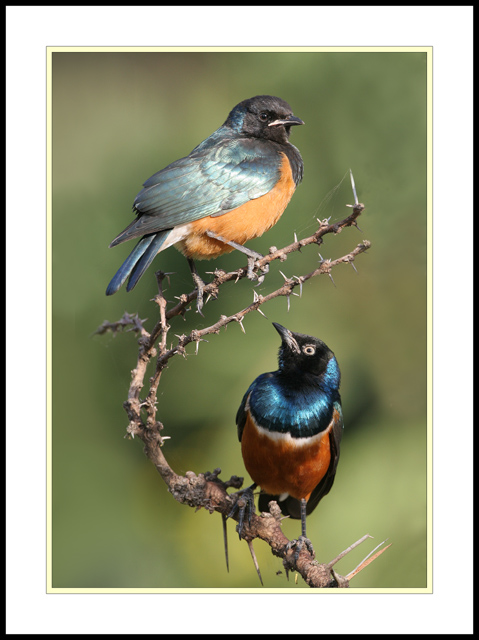 18cm. A small, short-tailed starling with a distinctive plumage.

Sexes similar. Juveniles have duller plumage with no more than a suggestion of the white breast band. Their irises are brown, later greyish white.

Feeds mainly on insects, but takes also berries, fruit and some nectar. Scavenges at picnic sites.
Forages in small flocks on the ground.
Associates with Greater Blue-eared Glossy-Starling and White-headed Buffalo-Weaver in Somalia, sometimes also with Shelley's Starling. In Ethiopia often seen with Stresemann's Bushcrow and White-crowned Starling, in Kenya with Hildebrandt's Starling and in Tanzania with Red-billed Buffalo-Weaver and Rufous-tailed Weaver.
A co-operative breeder, most pairs have helpers (usually male offspring from previous broods). The nest is a domed structure with a side entrance, made with twigs and grass. It's placed in a thorn tree, occasionally in a tree hole. Lays 4 eggs.
Presumably a resident species.

Search for photos of Superb Starling in the gallery