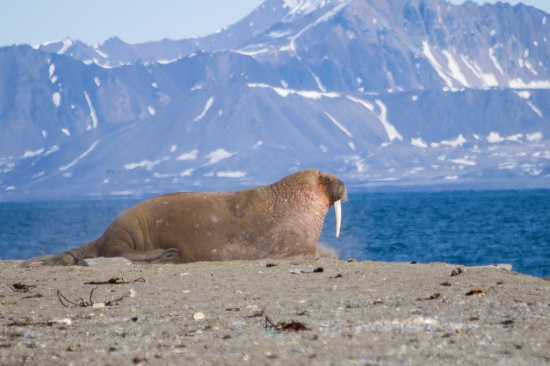 Until recently this sparsely inhabited Norwegian archipelago was considered virtually inaccessible to tourists. Today however, this high-Arctic land of dramatic mountains, glaciers and deep, narrow fjords can be visited with relative ease via plane or by joining one of the numerous cruises which venture to and around the islands.

Despite being roughly midway between the north of mainland Norway and the North Pole, Svalbard, or Spitzbergen as it is still perhaps better known, has a climate tempered by the effects of the Gulf Stream which reaches its western shores.

Although more than 160 bird species have been recorded in the Svalbard region many of these are vagrants, passage birds from mainland Europe which have wandered too far north. The attraction of Svalbard for birders is the enormous seabird colonies and the chance to see some specialities of the far north which occur only as rare vagrants in the rest of Europe.

Breeding seabirds include important numbers of auks such as Brunnich's Guillemot and Black Guillemot, Atlantic Puffin and millions of Little Auk and there is a single small colony of Common Guillemot.

Vast numbers of Northern Fulmar and Kittiwake breed widely around the islands. Ivory Gull is perhaps the one species that draws most birders and it breeds in fairly small numbers at scattered localities on the main island of Spitzbergen, on Nordausland to the north-east and the small and more remote Kong Karls Land further east. Sabine's Gull can also be seen and breeds irregularly in very small numbers particularly on Moffen Island and Ross's Gull has also possibly bred. Glaucous Gull and Great Black-backed Gull also breed and Herring Gull is sometimes seen.

Other seabirds include Arctic Tern and four skuas: Arctic Skua is a widespread breeder, Long-tailed Skua breeds irregularly in small numbers as does Great Skua, which is a recent colonist, and the scarcer Pomarine Skua which has also bred.

Waders breeding in Svalbard include both Grey Phalarope and Red-necked Phalarope although the latter is very scarce and breeds irregularly in very small numbers, the more widespread Ruddy Turnstone and Purple Sandpiper and a few Ringed Plover, Dunlin and Sanderling. Red Knot and Golden Plover have been known to breed.

Rock Ptarmigan breeds widely on the larger islands and is the only landbird present for the entire year. The only breeding passerines are the widespread Snow Bunting and the much rarer Northern Wheatear.

Of the non-avian attractions of Svalbard the greatest must be the Polar Bear: around one-fifth of the world population are found on the northern and eastern coasts. This magnificent animal can be seen on the north coast of Nordausland, on Kong Karls Land and sometimes Edgeoya and Barentoya. These more remote shores can be visited in August when the passages are ice-free and accessible to cruise ships.

The other land mammals of Svalbard are easier to see: Reindeer of a distinct subspecies is common in Nordenskioldland and Arctic Fox is widepread. Musk Ox and Arctic Hare have been introduced to the archipelago but have now died out.

Walrus occurs in summer on some northern and eastern shores notably Nordausland and the small island of Moffen off the northern coast of Spitzbergen. The commonest and most widespread seal in Svalbard is the Ringed Seal but several other species can be seen in summer such as Bearded Seal, Harp Seal, Hooded Seal and Common Seal.

Cetaceans are often seen from cruise ships around the islands and can include Minke Whale, Fin Whale, Bowhead Whale and Killer Whale, Narwhal and Beluga or White Whale.

More than 160 plant species occur on these islands many of them unique. Among the commonest are the yellow Svalbard Poppy, the purple Mountain Saxifrage and the Mountain Avens.

Late July to August is the most popular time to visit Svalbard but a little earlier is better for birders, late-June to early July when most of the regular bird species can be seen.

Svalbard is a fragile habitat and much of the land is under some form of protection with three national parks and numerous nature reserves, bird sanctuaries and plant reserves.

This is an island nature reserve at the southern end of the archaepelago. There is restricted visiting during the breeding season to various parts of the island, including the sea cliffs to the south.

The best way to see Svalbard and its wildlife is from the many cruise ships which now travel to and around the archipelago. These can be taken from Tromso in northern Norway or by flying to the main settlement at Longyearbyen and joining the ships there.

For Polar Bears and to guarantee some of the speciality birds of Svalbard it is necessary to sail around the archipelago to the remote eastern and northern shores and islands.

There is a limited amount of accommodation available in Longyearbyen and a campsite on Hotelneset about 5km away.

Guided hiking trips can be arranged on the islands but visitors should not venture away from settlements due to the risk of a confrontation with bears.

Search for photos of Svalbard (Spitzbergen) in the gallery

Search for photos of Svalbard (Spitzbergen) in the gallery