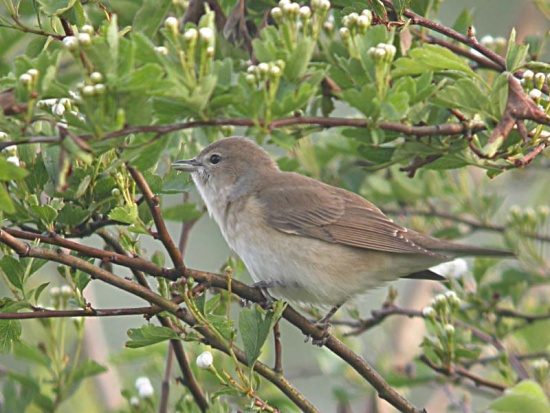 13-14.5 cm (5-5¾ in)
A plump warbler with round head and stubby bill. Rather featureless plumage with uniform olive brown-grey upperparts and paler underparts.

Woods, gardens and heaths with plenty of brambly undergrowth.

Each fall, this tiny bird sets out in the night, to begin its incredible journey. It makes its way over Germany, France and Spain, then turns southward to Africa, its final destination. Covering one hundred miles or more in one night, the warbler flies without error, guided toward its goal by keen navigational instincts. Even when blown out of its way by powerful side-winds, it is able to set itself back on course as soon as the weather has calmed. After wintering in Africa, the bird retraces is path back north, to its former nesting place in a European thicket. There it raises another generation of little warblers which will grow up, untaught, but completely able to fly over the same route their parents took, guided by the stars.

The garden warbler does not have the security of a flock, but travels alone.

Their diet consists mosty of insects, with the addition of some fruits and berries during the breeding season.

Search for photos of Garden Warbler in the gallery

Search for videos of Garden Warbler on BirdForum TV