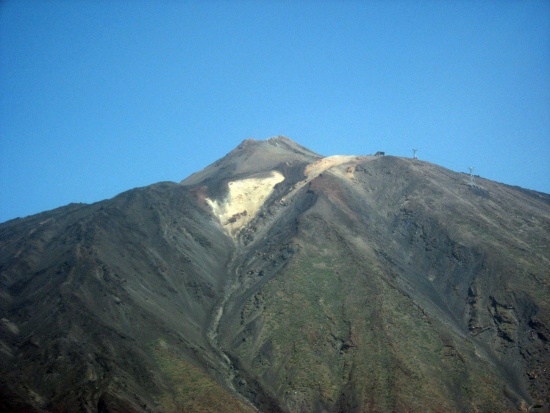 Tenerife is the largest island in the Canary Islands group, covering 2,058 km² and also has Spain's highest mountain, the 3,718 m Mt Teide.

Mt Teide is reached via the C821 road which crosses the centre of the island; a bus service runs from Puerto de la Cruz, the main tourist resort on the north coast. Tenerife Blue Chaffinch regularly feeds and drinks at the picnic site and information centre at Las Canadas at the entrance to Teide National Park. Further on the same road, about 10 km before (north of) Vilaflor, is Las Jajas picnic site with a restaurant and other tourist facilities.

Cooler, wetter, and consequently greener than the south, the north of Tenerife still has areas of the native laurel forest on hills in the north-west and north-east, at altitudes between 600-1100 m.

Erjos, in the north-west, is famous for both native pigeons, as well as the Canary Islands Goldcrest, Canary Islands Chiffchaff and African Blue Tit. The track which leaves the western end of the village of Erjos passes through small areas of pinewoods and then laurel forest interspersed with occasional rocks and cliff-faces.

Laurel Pigeon is greatly outnumbered by the easily seen Bolle's Pigeon but both species are present. Also here are Barbary Partridge, Long-eared Owl and Plain Swift, and the native subspecies of Common Buzzard, Eurasian Sparrowhawk and Common Kestrel, Eurasian Blackbird and European Robin. Common Moorhen, a scarce breeder in the Canaries, nests at ponds just off the Santiago del Teide to Garachico road, reached by turning left at the small crossroads about 1 km past the Los Llanos turn-off.

Green areas in the south of the island commonly host Red-throated Pipit in winter and one of the most regular sites is the Golf de Sur golf course where Berthelot's Pipit is also common. Other birds found here include Stone-curlew, Barn Owl, Plain Swift, Great Grey Shrike, Spectacled Warbler and Trumpeter Finch.

Waders occur on passage and among the rarer species seen here are Collared Pratincole, American Golden Plover, and Pectoral Sandpiper and Buff-breasted Sandpiper.

To reach the golf course leave the motorway at the San Miguel exit and turn towards Los Abrigos. 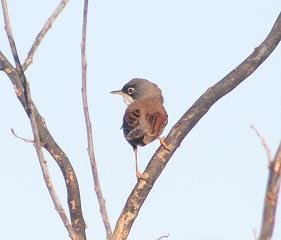 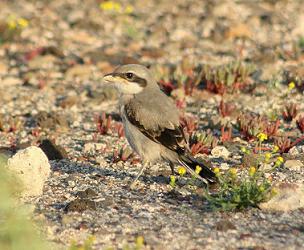 From El Medano take the westerly road towards El Abrigo and turn off to the left after 0.5 km on to a rough track and continue for another 0.5 km.

Just west of El Medano village and 1 km north of Los Abrigos is a small dam, Embalse de Ciguana, where Barbary Partridge and Trumpeter Finch can be seen as well as Grey Heron, Common Teal and various waders.

At extreme east end of El Medano, Playa Pelada is backed by cliffs. Here Barbary Falcon may be seen.

In the north-eastern corner of Tenerife the Pico del Ingles viewpoint has both species of pigeon although clouds can sometimes cause viewing problems. The surrounding laurel forests also have Eurasian Sparrowhawk, and Canary Islands Goldcrest and Canary Islands Chiffchaff. A popular tourist spot, there is a restaurant and car park here, north-east of La Laguna and easily reached off the C820.

The best-known seawatching point on the south coast of Tenerife is the lighthouse on the headland at Punta de la Rasca. From here large numbers of Cory's Shearwater can be seen as well as smaller numbers of Barolo Shearwater, Bulwer's Petrel and European Storm Petrel and Madeiran Storm Petrel.

To reach the lighthouse take the TF-21 motorway and turn off for Las Galletas on the first road after Los Christianos. 3-4 km after passing the El Palm-Mar turning there is a rough track heading south towards the lighthouse, follow this and park at the gate.

The remaining 2-3 km has to be walked but the open areas and scrub are good for Berthelot's Pipit and Stone-curlew, Great Grey Shrike and Spectacled Warbler, and Plain Swift is common overhead. Also possible here are Barbary Partridge, Long-eared Owl, Mediterranean Short-toed Lark and Trumpeter Finch.

Just east of the lighthouse track is the reservoir of Roquito del Fraile, which, although difficult to view due to high surrounding walls, can hold Grey Heron and Little Egret, Yellow-legged Gull and a variety of waders. Eurasian Coot breeds here, one of the few sites on Tenerife. Eurasian Spoonbill is possible and there is also the chance of transatlantic waders and waterfowl being found here. Ring-necked Duck and Lesser Scaup have both been recorded in recent years. 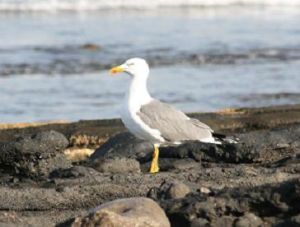 The best-known seawatching point on the north coast is probably Punta del Teno on the extreme north-western tip of the island, with regular Cory's Shearwater and occasional Barolo Shearwater.

To reach the point turn off the C820 at Icod and head for Buenavista. From there take the coast road west to the point. The spectacular cliffs around this part of the coast hold breeding Barbary Falcon, and the Roque de Garachico, just offshore from the town of Garachico, has breeding Bulwer's Petrel, Madeiran Storm Petrel and Cory's Shearwater and also provides a roost site for wintering herons.

Vagrants recorded on Tenerife include Buff-breasted Sandpiper, White-rumped Sandpiper and Pectoral Sandpiper, Lesser Yellowlegs and Ring-billed Gull. In November 2001 the first African Crake for the Western Palearctic was found on Tenerife.

A good range of dolphins and sometimes whales can be seen from the Tenerife to Gomera ferry, and also occasionally from any of the seawatching headlands. On land, the only wild mammal likely to be seen is the ubiquitous introduced Rabbit; Algerian Hedgehog and Mouflon have also been introduced. Three species of bats, including the Canary Islands endemic Canary Long-eared Bat Plecotus teneriffae, are the only native land mammals, but are not easily observed.

Several species of ferns occur, most commonly in the laurel forests in the northeast; the two most likely to interest visitors being Woodwardia radicans, up to 2 m tall, and Asplenium hemionitis with its unusual triangular fronds 10-15 cm long.

The laurel forests are noted for their range of endemic or near-endemic trees, including Loro (Laurus azorica), Viñatigo (Persea indica; Europe's only native relative of the Avocado), Til (Ocotea foetens), Barbusano (Apollonias barbujana), and Small-leaved (Ilex canariensis) and Large-leaved (Ilex perado) Hollies.

The Dragon Tree Dracaena draco, a woody member of the Lily family is found on Tenerife but old specimens are rare with only a few ancient specimens remaining at protected sites, most famously the huge specimen at Icod de los Vinos; young specimens are widely planted in towns, but wild plants are infrequent. The Canary Islands Date Palm Phoenix canariensis is similarly abundant as a planted tree, but rare in the wild.

One of the most productive areas for botanists is El Fraile on the north coast where around 300 species of flowering plant can be found, among them the rare mallow Lavatera phoenicea as well as restricted plants such as Centaurea canariensis, Vieraea laevigata and Limonium fruticans.

The desert-like El Medano in the south has a good selection of plants adapted to extreme conditions as has the east coast cliffs of Ladera de Guimar.

One of the most distinctive plants of Mt Teide is Echium wildprettii, a 2m tall spike of purple-red flowers in bloom in May-June.

Probably the most popular island of the group, Tenerife, with its excellent tourist infra-structure is perhaps the best base for a birding holiday in the Canary Islands.

It is also home to most of the group's endemics and they can often be seen within a short drive from the main accommodation bases of Playa de las Americas and Los Christianos on the south coast of the island.

Search for photos of Tenerife in the gallery