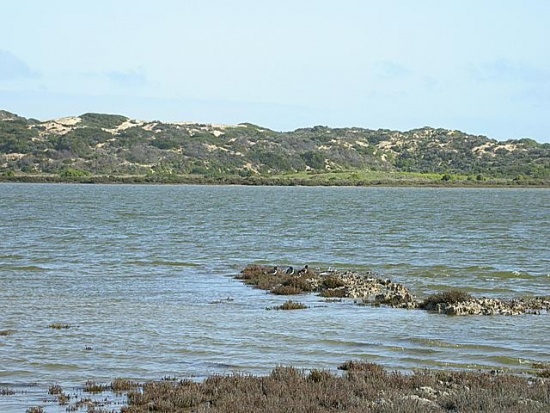 The Coorong, for those that don't know it by reputation already, is an enormous stretch of hyper-saline water near the mouth of the Murray River in South Australia. The Murray flows into two very large freshwater lakes (Lake Alexandrina and Lake Albert) which, in turn, exit into the sea about 100 kilometres south-east of Adelaide.

The river mouth is frequently blocked by sand, particularly since the Snowy Mountains Scheme and associated works succeeded in diverting the great bulk of the Murray's flow into storage for agriculture. The eons-long cycle of still summer waters blocked behind the sandbars and then a mighty rush of winter rains and spring-melted snows no longer operates, and there is great concern for the health of the lower Murray, the great lakes, and the Coorong. There is some hope that a little more environmental flow will be negotiated between the various iinterest groups over the next five years or so, and that this will be in time to save the Coorong.

The coastline runs south-east from the mouth of the Murray, in a long, gentle arc for about 200 kilometres to the town of Kingston SE. (The "SE" stands for something, no doubt, but I have no idea what.) For the first 150-odd kilometres of that distance, a massive sand dune meets the breakers of the cold Southern Ocean. It is only a kilometer or two wide, perhaps 50 to 100 metres tall, but almost 150 kilometres long, and on the inside of the dune - between the dune and the low-lying limestone of the coast proper - is the Coorong.

The Coorong is a very long, narrow stretch of hyper-saline water, supplied by the Murray and evaporated by the sun. It varies in salinity a great deal with the changing seasons (or at least it used to, before the Murray was damned) and becomes more saline further away from the river.

It is shallow, no more than about three metres deep, and there are associated salt lakes sprinkled here and there along its length.

The Coorong is almost legendary as a birding area. It is wise to note, however, that it isn't a single spot where vast numbers of seabirds and waders crowd together, but rather a vast stretch of shallow, non-tidal water and shoreline with small numbers of birds dotted here and there all the way along.

There are several places nearby that have particular attractions (including forest reserves a little inland, as well as the obvious water bird meccas like the islands where the Australian Pelican nest in their thousands) but for my money, the best way to enjoy the Coorong is to simply make your way slowly up or down the coast road, stopping whenever you see a place that takes your fancy. You will find species of interest almost anywhere. Just follow your nose and enjoy.

Waders are the great attraction, I believe, but my trip was in mid-winter and none of the migrants had arrived. No matter - there were still plenty of waders: among them the inevitable but nevertheless stunningly beautiful Red-necked Avocet, the endangered Hooded Plover (which nests on the open beach on the sea side of Younghusband Peninsula - which is one of the reasons you can't drive on the beach all year round), Australian Pelican of course, Caspian Tern, and ducks galore. The fairly common but very beautiful Pink-eared Duck was my favourite.

The migratory waders arrive in spring and depart in autumn, but there are more than enough birds to satisfy anyone even in mid-winter. I'm told that in high summer it gets very hot and the saline water smells dreadful. I gues it does, but it wouldn't stop me going back to see the summer waders. The Coorong is one of the great wader destinations.

As for land birds, the variety is excellent, particulary honeyeaters and chats. I don't think I have ever seen so many small raptors. The two small Australian hovering raptors were everywhere: Black-shouldered Kite on the landward side of the coast road, Nankeen Kestrel on the seaward side. (Why the strict demarcation? I don't know.)

Very nearly all of the Coorong and its foreshore is national park. The entire Younghusband Peninsula is a national park, and can only be accessed by 4WD or boat. Be sure to check on the regulations for where you can and can't take a vehicle or boat at particular times of year. They are clearly signposted and the South Australian National Parks Service makes maps and guides readily available.

Alas, while it is a wonderful place still, (to my untutored eye) the scientific evidence leaves no doubt that it is dying. It simply cannot survive much longer without the influx of fresh water that the Murray floods bring, and we won't have floodwaters in the Murray until we stop growing rice and cotton in the centre of the driest habitable continent on earth. As the water grows saltier and saltier, the tiny creatures that the birds and fish eat, salt-adapted though they are, can no longer thrive. Last year the pelicans did not nest. The South Australians are pushing hard for more water for the river instead of for cotton growing a thousand miles upstream in northern NSW and Queensland. (Cotton uses 10% of Australia's water and produces 0.01% of our gross domestic product.) They seem to be gathering broad support in the wider community, but there is a long, long way to go.

Where the national park finishes, there is a peninsula sticking out into the Coorong that was until recently a farm but has now been given into the care of the local Aboriginal community, who have built a swish-looking restaurant and cabin complex - a tourist trap, in essence. The land is quite degraded and I have my doubts about the environmental sensitivity of the project in some ways, but it is recovering, bit by bit, and is certainly worth a visit.

On first sight, I was unimpressed - the very first creature I saw was a Red Fox in broad daylight (rabbits aside, foxes are probably the single most destructive vermin species in Australia). But on closer inspection, the virtues of this place become apparent. As ever there are waders and waterbirds to enjoy, the view is magnificent, the people relaxed and friendly. Later on, as I walked over the former pastures from one wader-spot to another, a Stubble Quail exploded into flight with a great rush of wing-clapping at my feet.

There are Western Grey Kangaroo there, and Emu aplenty. The tribal elder told me that on most days the Emus can be seen swimming the Coorong out to the Younghusband Peninsula or back to the mainland, and that on hot days they make their way down to the water's edge to bathe and frolic in the Coorong.

The Coorong is within comfortable weekend trip distance from Adelaide. At a pinch, you could do it in a day trip, but it would be a very long day. From Melbourne, allow the best part of a full day for travelling: it is 800 or 900 kilometres.

Camping is allowed in a good range of places in the park. A permit is required but the fee is nominal. Outside of the obvious peak times, I doubt that you would miss out on a place.

There is plenty of more luxurious accomodation at the great lakes (Adelaide) end, but only a few places to choose from on the Coorong proper. I stayed at a combination sheep farm and holiday cabin place a couple of kilometres past Salt Creek (or maybe 5 kilometres towards Melbourne from Policeman's Point) and recommend it unhesitatingly. The cabins are old and not fancy, but I had a nice big cabin to myself with room for a family of 6 or so, stove, kettle, fridge, TV (for the real addicts) pots and pans and plates and things, bathroom facilities, the lot. Bring your own linen or pay extra and the farming family who run the place will provide it. Waking up to the sound of the magpies caroling in the gnarled gum trees just outside the cabin, and then seeing and hearing the magnificent Yellow-tailed Black Cockatoo in the big pine trees 50 metres away was a great way to start the day. Recommended.

Meals are available at the Salt Creek general store (sitting down to bacon and eggs on toast for brunch after getting up before dawn to go birding is a treat.)

Up the road 10 kilometres at Policeman's Point there is a hotel/motel and a caravan park. Don't miss ordering a Coorong Mullet for your tea there - it's the same species as the ordinary mullet you can catch almost anywhere, but the hyper-saline water of the Coorong gives it a special creamy flavour that is quite unique.

Search for photos of The Coorong in the gallery

Perhaps someone with more than a couple of days experience of the Coorong can make more specific recommendations, but for mine, the best advice is to simply follow your nose. If you can't find birds on the Coorong, then it's time you took up stamp collecting or something.