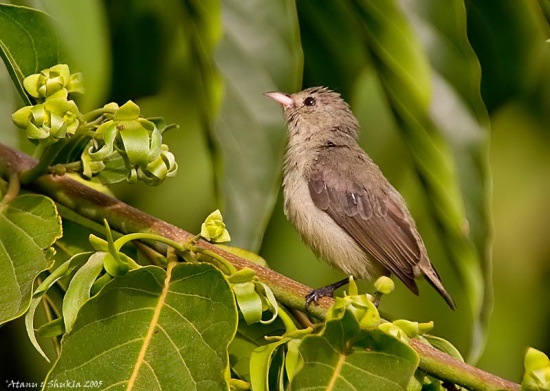 Lacks the pale supercilium of Nilgiri Flowerpecker. Also paler and less dusky olive above than finer- and darker-billed Plain Flowerpecker.

Found in deciduous forest, mangroves, cultivation, plantations, orchards, open areas with fig trees and urban garden with fruit trees. Often near mistletoes in canopy.
Up to 1400m in Nepal and to 2100m in Sri Lanka.

Feeds mainly on fruits of mistletoes. Takes also nectar, spiders and small insects.
Forages mainly in canopy. Usually seen singly and in pairs. Also in groups in non-breeding season. In Sri Lanka joins mixed-species flocks.
Breeding season January to June in northern India and Nepal, February to May and August to September in southern India.
The nest is a small pinkish-brown oval purse made of fine grass, vegetable down, bark, moss and other material. It's suspended from a twig among leaves some 1.5 to 12m above the ground. Lays 1 to 3 eggs.
Some altitudinal movements in the Himalayas recorded.

The call of this flowerpecker is a short tick call.

Search for photos of Pale-billed Flowerpecker in the BirdForum Gallery