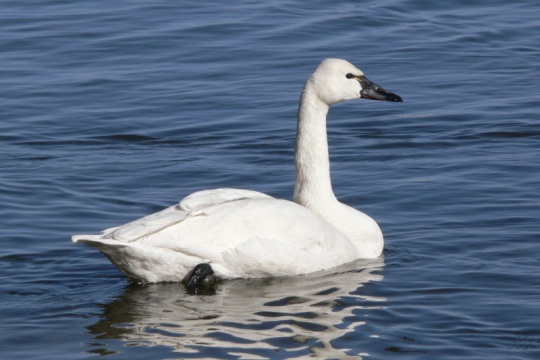 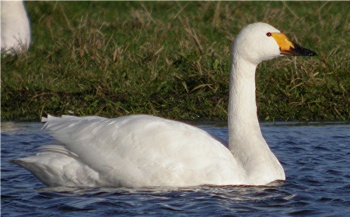 Trumpeter Swan is larger and lacks yellow on bill. Whooper Swan is also larger, but has more extensive yellow on the bill, the yellow coming to an acute point. Holds neck straight up, unlike Mute Swan, which bends its neck in a graceful curve. 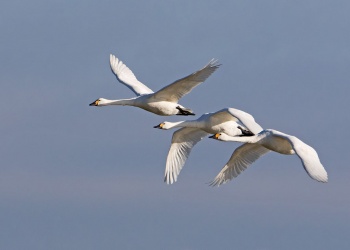 Whistling Swan breeds in arctic Canada and Alaska, and migrates to the Lower 48 US States, with concentrations in Washington, Oregon and California in the west, and New Jersey to South Carolina in the east; smaller numbers winter in many other states. Bewick's Swan breeds from European Russia east to the Taymyr Peninsula, and migrates across the White Sea and Baltic to winter in northwestern Europe from Denmark and north Germany to Belgium and in parts of England and (rarely) Ireland. Small numbers winter in north-west France and in the Camargue. Main passage periods are March-April and October-November. Wintering sites are usually traditionally used areas but in severe weather there may be considerable wandering. In the Western Palearctic breeds only on the coasts of Arctic Russia, on Ostrov Kolguyev and Novaya Zemlya.

Recorded as a vagrant north to Svalbard and Bear Island, to most mainland European countries and south to Cyprus, North Africa and Jordan. Whistling Swan has also occurred a few times in western Europe and eastern Asia, and Bewick's Swan a few times in North America, in each case mixing with the other subspecies.

Some authorities have treated the two as separate species; see this thread for discussion.

A few older authorities have also treated eastern Asian populations of Bewick's Swan as a third subspecies Cygnus columbianus jankowskii, or (if accepting the Bewick's split) as Cygnus bewickii jankowskii, but it is now rarely considered distinct from Bewick's, with no significant morphological or genetic evidence to support its separation.

Breeds on pools and lakes in areas of open swampy tundra, sometimes along slow-flowing rivers or on sheltered sea-coasts. On passage on lakes and rivers, sometimes on coasts, and in winter in wetland areas with open water and often flooded fields. These long-established wintering grounds may not be occupied for the entire winter but may be used as a base from which the birds look for new feeding areas.

The 4-6 creamy-white eggs are placed on a large mound of grass and moss on an island or beside a marshy tundra lake.

Search for photos of Tundra Swan in the gallery

Search for photos of Tundra Swan in the gallery

Search for videos of Tundra Swan on BirdForum TV