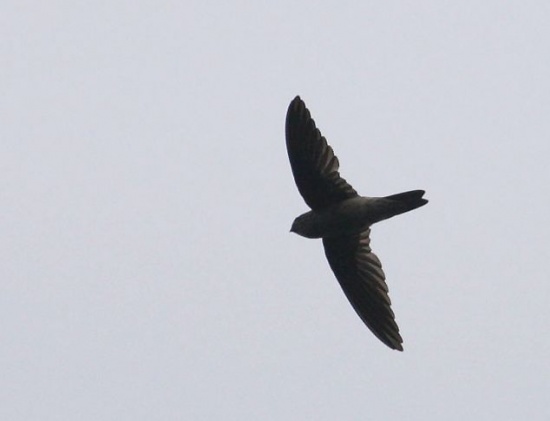 With 13cm a medium-sized Swiftlet, similar to other Swiftlets and highly variable

Found from south-east Asia to islands of the South Pacific.
From Palawan to Sulawesi, Moluccas, New Guinea, New Britain, New Ireland and the Solomon Islands to Vanuatu.
Two records from Australia.
Common or even abundant in most of its range.

Like other Aerodramus Swiftles this species is often placed in Collocalia.
Formerly considered conspecific with Mossy-nest Swiftlet, Palau Swiftlet, Guam Swiftlet and Caroline Swiftlet. The five species form now a superspecies.
The subspecies from Palawan is sometimes considered a full species. Moluccan Swiftlet, Ameline Swiftlet and Mountain Swiftlet have been regarded as subspecies of Uniform Swiftlet too. The exact relationsship among the various Swiftlets are still poorly understood.

Usually found over forest, but also over coasts and islands. Recorded in lowlands and highlands.

Feeds on insects, taken in flight. Highly gregarious and often in big flocks together with other Swiftlets and Swifts. Feeds very low over open country and all day.
Breeding season differs throughout range. Nests in colonies in caves and is capable of echolocation. The nest is made of vegetable matter and hold toghether with little saliva. Lays one to two eggs.
Resident, but some wandering occurs. Is known to move along storm fronts and vagrants have reached Australia.

Search for photos of Uniform Swiftlet in the BirdForum Gallery