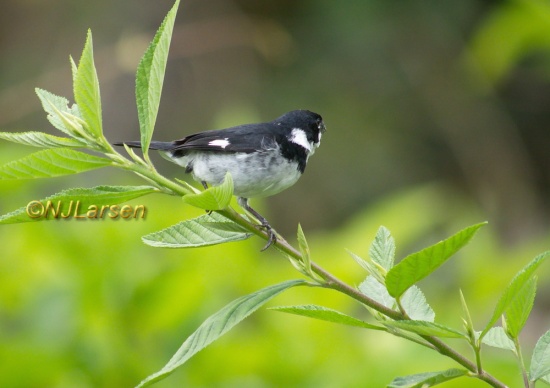 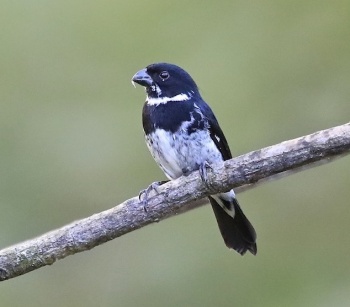 10.5 cm with a dark, typical Seedeater bill.
This species is indeed variable.
Some males almost all black except for a small white patch on the folded wing (subspecies corvina). Most other males show pale underside and a half collar with varying amounts of black on throat; some southern subspecies are dark slaty grey on upperside.
The female is buff to tan overall.

The Thick-billed Seed-Finch is very similar, but it has a straight culmen, contrasting with the quite curved culmen of the Variable Seedeater.

South Mexico through Central America and in South America west of the Andes from Colombia to northwest Peru.

These four subspecies are sometimes considered part of a larger species also called Variable Seedeater but with scientific name Sporophila americana; in the split version, Sporophila americana is Wing-barred Seedeater. Part of the reason for the previous treatment was confusion over the status of Caqueta Seedeater. Today, these three species and Gray Seedeater are treated as parts of a superspecies. 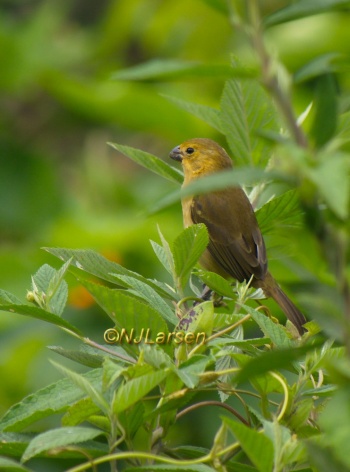 The two last subspecies are both only found west of the Andes. At least one authority considers S.c. corvina a full species, Black Seedeater based on it having only a narrow zone of hybridization with the rest of the species in the Panama Canal area.

Lowlands and foothills up to 1,500 m (1800 m in Ecuador) altitude in semi-open areas such as forest edges, roadsides, low scrub and gardens. It also flocks with other species of seedeaters in pasture, weedy fields and other grassland.

Their main diet consists of seeds, particularly grass seed, with the addition of some berries and insects.

The deep cup nest is constructed from fine grass, rootlets, tendrils and fibres. The clutch contains 2 (very occasionally 3) brown-speckled pale grey eggs which are incubated by the female alone for 12–14 days to hatching. They fledge after 12 days.

Search for photos of Variable Seedeater in the BirdForum Gallery