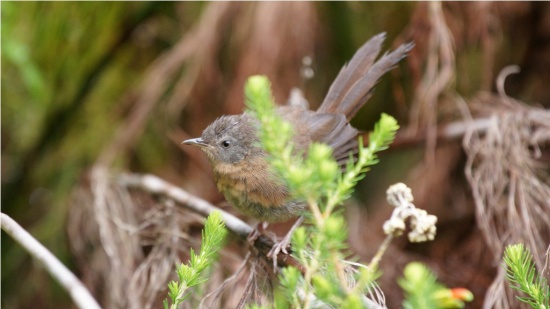 Recent molecular studies indicate that this species, rather than being related to the Bradypterus warblers, is one of a group of African warblers which include the Sylvietta crombecs, Rockrunner Achaetops pycnopygius, Cape Grassbird Sphenoeacus afer, and Yellow Longbill Macrosphenus flavicans (Beresford et al. 2005). Therefore this species was moved from the genus Bradypterus to its own genus Cryptillas.

Skulking and inconspicuous, but not shy.

Forages on the ground under shrubs and grass tussocks for insects and possibly other invertebrates.

Monogamous and territorial. The nest is a deep cup built using grass, dead leaves, bark, twigs and plant down. It is well concealed and usually within 30 cm of the ground. Two eggs are laid August to November, and incubated by the female for about 21 days. Both the adults feed the nestling; nestling period is 18-19 days.

Search for photos of Victorin's Warbler in the gallery

Search for photos of Victorin's Warbler in the gallery