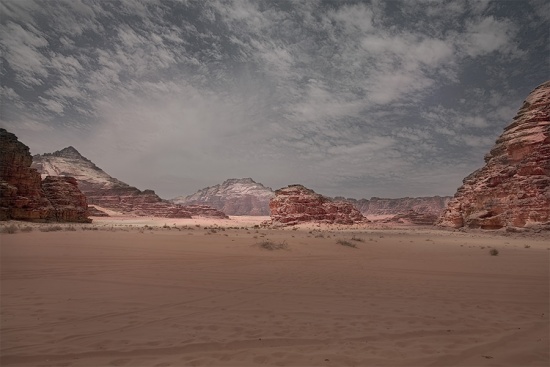 A popular tourist destination in the south of Jordan, Wadi Rum is a huge wadi of dramatic scenery, steep cliffs, ravines and rock pillars surrounded by arid desert.

The birds of the area include many typical desert species, and larks and wheatears in particular. In addition the area attracts large numbers of a wide variety of migrants. The wadi is a Man and the Biosphere Reserve.

Desert Lark, Bar-tailed Desert Lark, Calandra Lark and Greater Hoopoe-Lark can be seen as well as Hooded Wheatear, Black-eared Wheatear, Mourning Wheatear and White-tailed Wheatear. Raptors include Long-legged Buzzard and Barbary Falcon and with luck also Verreaux's Eagle and Sooty Falcon. The last two are best looked for to the east of Wadi Rum village.

Lappet-faced Vulture and Lammergeier have been recorded in the area. Desert Eagle Owl and Desert Owl are possible here and other desert species include Stone-curlew and Cream-coloured Courser.

Reached by taking the Route 53 north from Aqaba and turning east after 16km at Ar Rashidiyya to Wadi Rum, a resthouse can be found about 30km from the main highway. 4WD vehicles with drivers can be hired in the village. Further east is Disi, an area of agricultural land good for migrants.

Search for photos of Wadi Rum in the gallery