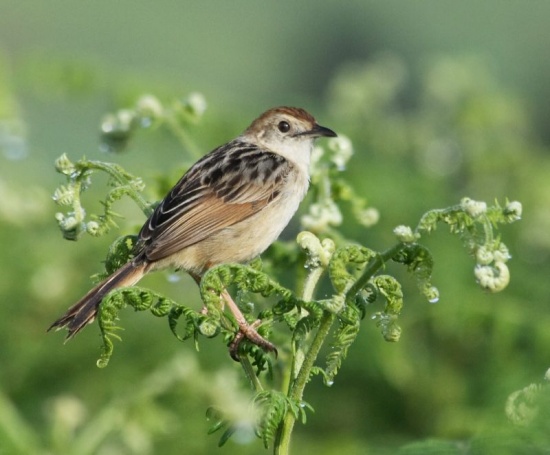 Length 13-14 cm, mass about 15 g
A grassland Cisticola with a long tail and streaked back.
Breeding adult (nominate race): The crown is rufous, streaked dark brown, and the mantle, back and rump are grey streaked blackish brown. The tail is tawny with a darker subterminal band and pale tip. The flight feathers are brown with russet edges which result in a russet bar on the closed wing. The underparts are buff, being darker on the breast and flanks.
The bill is horn, the eyes brown and the legs and feet pinkish.

From Kenya west to Angola and south to eastern South Africa. A locally common resident.

Cisticola lais has seven subspecies; the colour of the streaking on the upperparts varies and some populations are spotted below.[1][2]

Grassland with bracken and shrubs.

Singly, in pairs, or in small family groups. Often perches on the top of shrubs or bracken, but forages low down in vegetation for insects.

Search for photos of Wailing Cisticola in the BirdForum Gallery