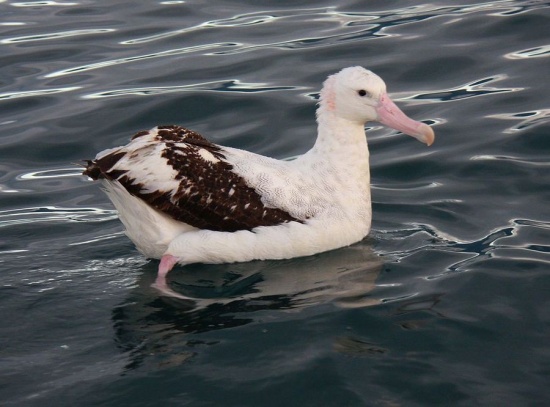 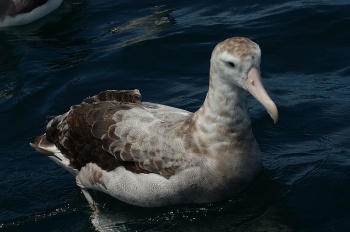 An enormous (107-135cm) seabird with a huge (330cm) wingspan and majestic flight. This is the largest albatross. Plumage varies greatly according to age and can be very difficult to distinguish from Royal Albatross D. epomophora.

Adult: Plumage entirely white except for black primaries and narrow black tips to secondaries although head may be stained pinkish when breeding. Bill fleshy-pink or whitish with horn-coloured nail, legs pinkish to bluish-white.
Female: of the race antipodensis and both sexes of amsterdamensis are considerably darker, and resemble juveniles of the other races.

Immature: Juvenile largely chocolate brown except for white face, underwing white with narrow dark trailing edge and small black tip. Underwing pattern stays much the same but as the bird ages the brown on head and body is gradually replaced with white resulting in a mainly white bird with dark upperwings. These gradually whiten from a white central wedge rather than from the leading edge backwards as in Royal Albatross. Many otherwise adult birds retain dark feathers at the sides of the tail, a feature not shown by adult Royal. check upperwing pattern carefully to distinguish from Royal Albatross. At close range black cutting edges of bill indicate Royal.

Circumpolar in Southern Oceans. Breeds on a wide range of islands (see Taxonomy). At sea mainly between Tropic of Capricorn and 60deg. S but sometimes occurs further north off South America and Africa. Recorded as a vagrant in Panama in 1937 and in California in 1967 but all northern records could involve ship-assisted birds. European reports such as Sicily in 1957 and Portugal in 1963 are generally regarded as suspect. Dispersive rather than migratory. 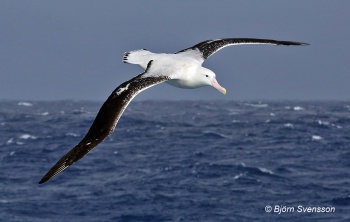 Five subspecies are recognised, but all varies considerably in size and undergoes a complex age-related sequence of plumages. Breeders on South Georgia, Prince Edward, Marion, Crozet, Kerguelen, Heard, McDonald and Macquire are the nominate race (exulans), breeders on Inaccessible and Gough Islands (formerly also Tristan da Cunha) are dabbenena, breeders on the Auckland group are gibsoni, breeders of Antipodes and Campbell are antipodensis, and breeders of Amsterdam Is. are amsterdamensis. All range widely at sea when not breeding. Formerly, race chionoptera was accepted, but today it is usually considered a junior synonym of the nominate.[1]

Alternatively, only the Amsterdam Albatross is split off, but genetic evidence suggests this would result in the Wandering Albatross being polyphyletic. 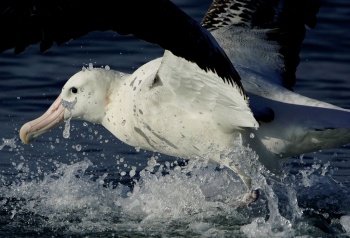 Breeds colonially on grassy clifftops and plateaux on islands but spends most of the year at sea. Frequently follows ships.

Begins in September, nest is a large bowl made of mud and vegetable matter. One egg laid in mid-November, white, sometimes speckled with red-brown (131 x 78mm). Incubated for 66-77 days and young fed daily by both parents for first 20 days. Feeding gradually takes place less often but with larger amounts of food per visit. Fledges in September and takes at least ten years to reach full adult plumage.

Generally silent though may utter harsh croaking and braying sounds when competing for food at sea. Claps bill in display. 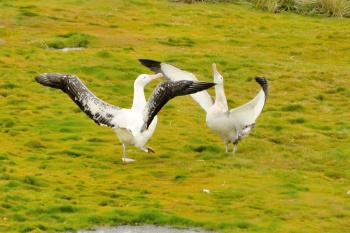 Search for photos of Wandering Albatross in the gallery

Search for videos of Wandering Albatross on BirdForum TV