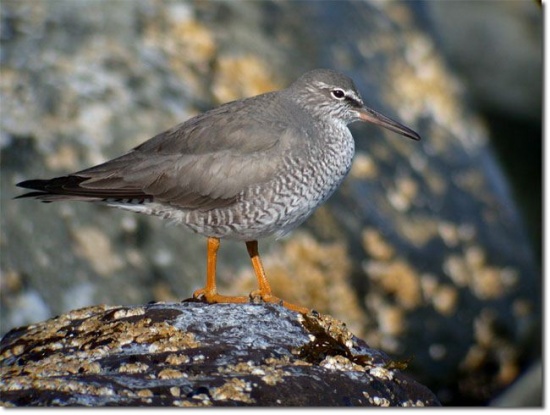 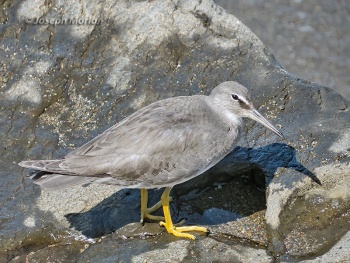 Length 28cm (11"), Wingspan 66cm (26"), wt. 110gm.
A shorebird with short yellow legs, a plain gray back.
In breeding season (Apr-Oct) the adult bird has heavy barring on the underside, from cheeks to tail.
Nonbreeding birds lack the barring, and have gray flanks and breast, with the remainder of the underside white. Juvenile plumage is similar to nonbreeding adult, but distinguished by narrow white fringing to wing coverts and tertials.

Grey-tailed Tattler is similar but in breeding plumage has reduced barring on its underparts especially its undertail coverts which are usually unmarked. At close range nasal groove extends to mid-point on bill of Wandering but shorter on Grey-tailed. But this is very difficult to see and the nasal groove should not be confused with the nostril. Otherwise best distinguished by call which is a series of hollow whistled notes in Wandering Tattler compared to more plover-liked slurred whistles for Grey-tailed. 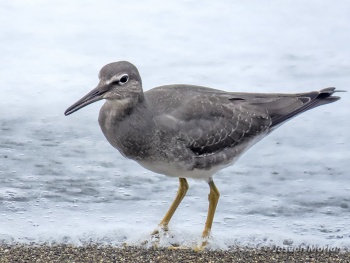 Highly migratory. Some cross the ocean towards Hawaiian Islands, others migrate along the coast on both sides of the Pacific crossing the equator to South America and Australia.

Search for photos of Wandering Tattler in the BirdForum Gallery

Search for videos of Wandering Tattler on BirdForum TV