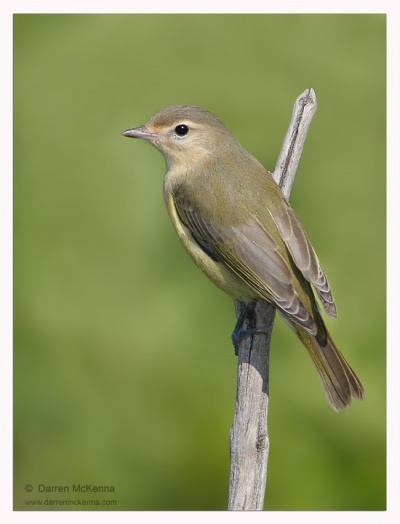 12·5–14 cm (5-5½ in)
A drab vireo with few distinguishing marks; warbling song is the best clue. There is an indistinct stripe over the (black) eye. Upper parts are gray or olive-gray, breast whitish with light yellow wash on flanks. Blue-gray legs and feet. 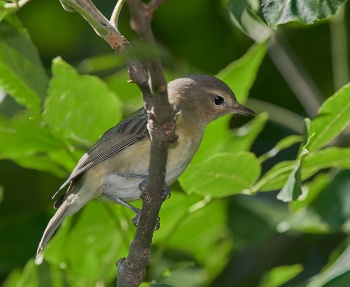 Easternmost and westernmost birds are quite different: eastern bird averages longer, deeper bill (looks a little swollen) with paler upper mandible, longer wing, and heavier. In plumage, the crown of western birds often darker than rest of upperparts, which has a generally stronger olive-green tone than eastern birds. Differences in plumage appears stronger between eastern and north-western birds and less pronounced when comparing with south-western birds.

Throughout the USA except the deep south, in the western provinces of Canada and extreme western mainland of Mexico. Has declined in the eastern U.S. where shade trees have been sprayed with insecticides.

Warbling vireo has a total of five recognized subspecies[1]:

One of these, victoriae has been claimed as a separate species, Cape Warbling Vireo. Another treatment is for this and three other subspecies (swainsonii, leucopolius, and sympatricus) to be split into Western Warbling vireo (would then be Vireo swainsonii), and the remaining subspecies to be Eastern Warbling Vireo (Vireo gilvus) with subspecies gilvus, brewsteri, eleanorae, bulli, amauronotus, and strenuus. The current consensus among worldwide checklist makers seems to be not to accept this split.
Subspecies swainsonii should be spelled swainsoni[2].

Treetops, especially large trees and along rivers and creeks

Individuals or pairs flit about in the treetops in wooded country, especially in riparian zones. Moves rapidly when foraging, but may perch in the same spot to sing for a several minutes. Often in the densest foliage, so hard to spot even when close.

Search for photos of Warbling Vireo in the gallery